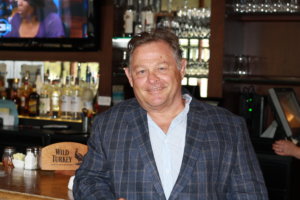 The woman, whose niece Samantha had an accident, carried a flier with the toddler’s picture. Michael saw the little girl’s face and, in his “aha!” moment, his heart melted.

He didn’t give a gift card.  Instead, he provided all the food for a spaghetti dinner fundraiser.

The dinner was a massive success, and Samantha’s mother, Michele Anderson, said it made all the difference. Her daughter needed someone with her at all times. The fundraiser made it possible for Michele to quit her job.

“From July to the end of the year, she was never alone. We didn’t have to choose between working and being there for our daughter.”  Her heartfelt gratitude is shared by Michael.

When he talks about Samantha, he removes his glasses to wipe a tear.

“I wanted to invite Sami to the (Philanthropy) Banquet, but one look at her and I wouldn’t be able to talk.”

After that fundraiser and an earlier one helping a Trinity student, Michael rethought Angelo’s marketing.

“I had a marketing budget,” he muses,” so I thought, why not divert some of that to help people?”

“Watching Dad . . . he was a wrestling coach and he mentored kids, employed some of the troubled ones and took them under his wing. That stuck with me.”

When asked, “Is it about giving back?” Michael says, “I have no answer for that, because it is a specific thing. I help specific organizations and people I believe in. People who played by the rules and have done right all their lives but were hit with something insurmountable. I believe in the work.”

Angelo’s can’t help everyone.  Making 1,000 meatballs, 120 pounds of pasta, and 30 gallons of sauce stretches the staff, so they can only do about six fundraisers for individuals per year.

“It’s hard that I have to turn so many people down.”

“Michael Passalacqua puts his heart into his commitment to our community,” said Mary Jo Podgurski, whose Teen Outreach has benefitted.

“He’s always there for our young people, but it is the beauty of his spirit as a true role model that sets Michael apart.”

Angelo’s staff does all the work, making the meatballs, sauce and all that pasta. Michael will honor them at the WCCF banquet in November, where Angelo’s will be recognized with a Charles C. Keller Excellence Award for Corporate Philanthropy.

“I don’t do it for the recognition. It’s nice but not the primary thing.  I hear a story.  It tugs at me.  That’s the singular motivation.”