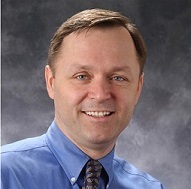 Through its sophisticated simulation software, ANSYS enables its customers to analyze the performance of various products prior to production, helping to reduce costs and to achieve optimal results.  But no such simulation or analysis was performed by ANSYS itself as it embarked on its corporate philanthropy program.  In fact, the company did not set out to create a corporate philanthropy program.

It happened organically,” said James Cashman, ANSYS Chief Executive Officer.  “At ANSYS our employees know that our worst day is better than some people’s best day and so we just want to do something to help.”

Decisions regarding charitable giving and activities are not driven from the top down, he said.  Rather, a committee of employees representing a cross-section of the company, decide collectively what to support, and all ANSYS employees are able to suggest charitable projects to the Committee.  Those projects that appeal most to this Southpointe-based corporation are those that enable an ANSYS gift to leverage other philanthropy, and that provide volunteer opportunities for ANSYS employees.

One such leveraging effort was the $10,000 gift to the Washington City Mission, made shortly after the Mission’s building in Washington sustained substantial damage in a June fire.  “When we made that gift to the Mission, we encouraged other companies to make a similar gift to help,” remembered Mr. Cashman.  According to Dr. Sally Mounts, Development Director of the Washington City Mission, the ANSYS gift was the first major gift received after the fire and the ANSYS challenge was instrumental in helping to secure several other corporate gifts of $10,000, as well as many other gifts of lesser amounts.

Another leveraging effort was the ANSYS Tickets for Charity program that enabled local charities to receive 100% of their ticket sales for the MYLAN Classic, which was held in Washington County from 2010 to 2013.  Over this span, ANSYS donated tens of thousands of dollars to the bonus pool, which enabled local charities to raise $1,800,000 for their causes.  The bonus pool was disbursed to the charities based upon the percentage of tickets sold.

In addition to taking the lead on a challenge to support local charities, ANSYS also responds to challenges from others.  After learning of the Washington County Community Foundation’s successful day of giving, WCCF Gives, ANSYS contributed $10,000 in each of the past two years to the day of giving bonus pool, which resulted in grants of $1,370,000 to local charities.

To encourage young people to become involved with simulation technology, the company provides a student version of its software, ANSYS Student, free of charge.  It also participants in many STEM (science, technology, engineering and mathematics) educational programs and competitions, including the Girls Rock Science program at the Carnegie Science Center, the BEST (Boosting Engineering, Science, and Technology) robotics competition and the FIRST (For Inspiration and Recognition of Science and Technology) robotics competition. 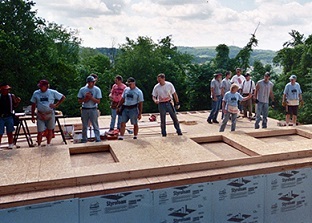 To encourage employee involvement with charities, ANSYS matches a portion of an employee’s gift to a qualified charity, and provides flexible scheduling for employees to volunteer.  With offices worldwide, ANSYS employees volunteer for a wide variety of charitable activities, from packing food boxes at food banks, to serving meals to the homeless and coordinating fundraising walks and clothing drives.  James Cashman eagerly shared many stories of how ANSYS employees are making a difference around the globe.  But no story gave him greater joy than that of the house that ANSYS sponsored for a Washington County Habitat for Humanity family. 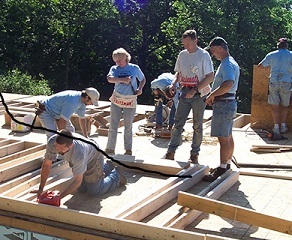 Working alongside its future owner, a single mother of three children, Cashman and other ANSYS employees measured, sawed, hammered, and painted, until the house became a reality.  When it was time for the family to move in, ANSYS employees organized a house-warming party with food and gifts.  A photo of the home owner and her children is prominently displayed in Cashman’s office. “They have become a part of the ANSYS family and we keep in touch,” said Cashman.