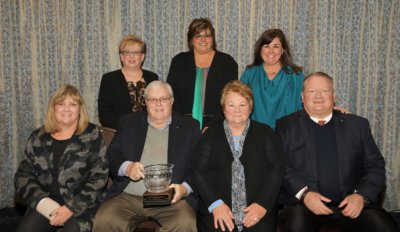 Inside the offices of Campbell Insurance Associates (CIA) is a shelf running the length of an entire wall. One might expect it to hold books on complicated insurance regulations or piles of paperwork to be processed. Instead, the shelf is covered entirely in family photographs. In this touching collection of happy memories, the bright faces of children are what stand out most. So, it would come as no surprise that many of the charities CIA quietly supports help families and children in Washington County. “Family is an important thing to us,” says Mark Campbell, Executive Vice President of CIA. “That’s why we connect with those causes . . .”

One of those causes is Blueprints’ “A Little LIFT” program, a crowdfunding project providing direct support to qualified individuals and families who need a helping hand with little obstacles, such as car repairs, work attire, paperwork fees, or even a front door. According to Jeffrey Fondelier, Vice President of Operations at Blueprints, Mark has been involved since the program’s launch. “He knows the struggles that people in our community go through every day, and the generosity of Campbell Insurance Associates has made a great difference in alleviating some of those barriers.”

Another special charity, CASA for Kids, connects abused and neglected children in the court system with trained volunteer advocates. There’s also Watchful Shepherd, which provides children in at-risk homes with an electronic device that can be used to call for help. Additionally, CIA supports the TC Open Charitable Foundation, which has donated over $1 million to charities such as the Make-A-Wish-Foundation, the Fisher House of Pittsburgh, and Semper Fi Fund Kids Camp.

Todd Ashmore of The Dreamers Co International remarked: “When we undertook the ‘A Dreamer Christmas’ event, we did not have much knowledge on how to pull it off. I reached out to Mark and Nan Campbell to see if one of them would assist. They both volunteered and are critical members of the team. . . The financial support is very important, but being able to look to them for advice, time, and energy is what puts them in the top tier of philanthropists for a new non-profit like The Dreamers Co.” The Dreamers Co works to revitalize Washington’s residential and commercial real estate inventory. Among its numerous projects, the charity has beautified two inner city playgrounds.

CIA is happy to do all that it does for the community without any recognition or fanfare. But the namesake of this corporate philanthropy honor holds a special significance for CIA President John Campbell, Mark’s father and the company’s founder. Nearly 25 years ago, John served as one of the founding members of the Community Foundation, along with noted local philanthropist Charles Keller. Both John and Charles worked tirelessly in the WCCF’s early days to spread the word about the charitable giving opportunities presented by the Foundation. “My dad and Charles worked together to help make great things happen,” Mark reflects. He went on to say, “Charles was there to present the WCCF’s Philanthropists of the Year award to my parents in 2008 . . . And now, it’s an honor to be receiving this award bearing Charles’ name.”