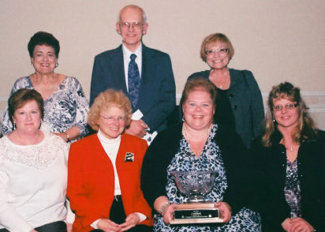 CentiMark Manager of Public Relations Kathy Slencak holds the award surrounded by representatives from the charities that nominated the company for this honor.

The underserved and the underprivileged are much more than charitable causes to the employees of CentiMark Corporation.  They are people who have faces, names, and profound appreciation for things such as a meal, a place to stay, or shoes for their children.

Perhaps the company itself says it best: “while roofing and flooring is our business, giving back to the community is our commitment.” Nationally, hundreds of charities receive volunteer or financial support through CentiMark and the CentiMark Foundation.  The recipients range from the hungry, the homeless, and at‐risk children to abused women, displaced veterans, and senior citizens.  No matter how much good the company does in a year, Founder Edward B. Dunlap always encourages his employees to find a way to “do more next time.”  And they enthusiastically set out to do just that.

The company began in 1967 as a part‐time industrial cleaning products business.  Today, CentiMark leads North America’s commercial roofing and flooring industry.  Its grassroots philosophy of giving back began decades ago.  As CentiMark Foundation Executive Director John Rudzik recalls, “One day we were told to come into the office the next day in casual clothes.  We ended up at the Jubilee Soup Kitchen in Pittsburgh…Ed wanted us to experience what it was like to have a meal there.”  In the years since, CentiMark employees have been moved by visits to every soup kitchen and mission in the area.

When CentiMark recognizes a human service need in the community, without hesitation and without fanfare, it works to address that need.  The company annually supports many local charities including: Washington Christian Outreach, Washington City Mission, Junior
Achievement, police and volunteer fire programs, the Make‐a‐Wish Foundation, the Greater Washington Food Bank and its pantries.  CentiMark also works with social service agencies to identify families who are struggling and provide food, as well as special surprises like Easter baskets and back to school clothes, to them throughout the year.

On Fridays, CentiMark employees, including President & COO Timothy Dunlap and his
wife, Teri, take to the road to deliver Meals on Wheels to seniors in Peters Township. Participants often go the “extra mile,” lending a hand with yard work or household tasks.

“When drivers report a problem back to CentiMark, there is immediate action to fix it…
during one very hot summer, drivers expressed their concern about clients who had no air
conditioning.  CentiMark immediately purchased and installed window air conditioners for those who were suffering,” wrote Susan T. Ruether, Director of the Meals on Wheels of Peters Township.

In addition to working to feed seniors, the company sponsors the Blessings in a Backpack program, which provides over 700 underprivileged students in Washington School District with nutritious snacks for the weekend.

“Giving back to the community hasn’t shaped the company culture…it is the company culture.  It’s been ingrained in us for years.  Now we have the resources to do more,” said Tim Dunlap.  “CentiMark is proud to be named a recipient of the Charles C. Keller Excellence Award for Corporate Philanthropy because it recognizes our employees for their incredible service to those in need.”

Since the majority of CentiMark’s philanthropy is anonymous, charities will often forward touching voicemail messages, notes, and pictures drawn by children to the corporate office. Nearly all the time, the authors don’t know who they’re thanking but they are incredibly grateful for a gesture that made them feel as though they and their families are valued.

As the employees of CentiMark know, sometimes little acts of kindness can hold the greatest meaning.