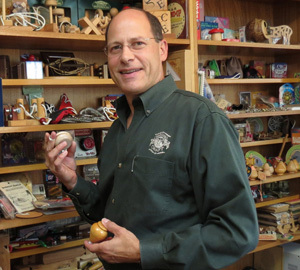 There is something truly magical about toys, both for the young and the young-at-heart. We cherish them, we collect them, and we share their joy with others.

Quality, authentic American-made toys like kazoos, yo-yos, and marbles are available for today’s children (and adults) thanks to Channel Craft, a manufacturer and distributor in Charleroi that is committed to hand-crafting toys, games, and puzzles from natural materials. No batteries required.

In fact, an important focus has been the hiring, training, and promoting of individuals with challenges that might have otherwise prevented them from employment. During the company’s early days, product assembly work was provided to the participants of sheltered workshops throughout West Virginia and Southwestern Pennsylvania. In 1993, Channel Craft was named “Employer of the Year” by the Governor’s Committee on Employment of People with Disabilities. Recently, the company was recognized by the Commonwealth’s Department of Public Welfare for providing individuals with the opportunity to move towards self-sufficiency through employment. A working relationship with the Washington Greene County Job Training Agency helps to ensure these efforts will continue.

Traditional toys require a certain level of physicality, hand-to-eye dexterity, and creativity. So, it should come as no surprise that Channel Craft has supported the activities of organizations that promote wellness and life-long play, such as the Mon Valley YMCA, the Special Olympics, and Senior Olympics.
Channel Craft employees have also banded together to raise funds and raise awareness through activities such as California University’s heart walk.

But it was in 1992 that the company became involved with what is now its signature charitable activity.

“So much of what we do is about selling toys. I thought it would be great for us to take a step back and give the toys away,” Helfer remarked. And through participation in Toys for Tots, Channel Craft has given thousands of toys to needy children in the Mon Valley.

“The integrity of the Toys for Tots program can only survive because of people like Mr. Helfer and Channel Craft,” wrote Herman J. Bigi, Adjutant of the Mon Valley Leatherneck Association (part of the Marine Corps Veterans), which coordinates the local program.

On the day that the toys are to be distributed, craftsmen and women volunteer their time to provide hands-on demonstrations of the toys they built to children who have never seen a set of pick-up sticks, twirled a top, or even heard of tiddlywinks. To a spectator, it is like a chaotic scene in Santa’s workshop. Balls bounce atop the table, there is a cacophony of whistles and kazoos, and children from a generation programmed to desire the latest “tech toys” discover games that have stood the test of time.

Each child goes home with one of everything at the Channel Craft table and new ways to play that can be shared with family, friends, and perhaps even one day, their own children. However, it is likely the Channel Craft employees who spent the day giving will tell you that they walk away from the experience with the best gift of all.

Whether they are working, playing, or serving the community, the team at Channel Craft knows just how important it is to “Have fun!"