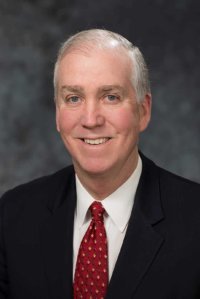 Community Bank appreciates the trust that customers place in the bank; that’s why it takes its commitment to give back so seriously. And it is why the bank is careful to take its philanthropic cues from the community. “You don’t understand people until you understand their passion,” observes Mr. McCune. So whether it is diabetes, domestic violence, or Dobermans, Community Bank cares about what their customers care about.

When a Community Bank customer takes out a new loan, they are not the only one getting a financial boost; a donation will be made in their honor to their favorite charity or church through the Community Bank Cares program. To date, more than one thousand donations totaling over $113,000 have been made in the two and a half years the program has been running. Over 1,000 different charities have been on the receiving end of this generosity, organizations like the Humane Society of Washington County, Avis Arbor Women’s Shelter, the West Alexander Fire Department, and the Salvation Army.

While the bank makes significant charitable donations on the corporate level, it is equally proud of the grassroots charitable efforts undertaken by its employees. Not a week goes by that employees aren’t participating in some form of charitable activity, such as organizing a company Relay for Life team for the American Cancer Society, hosting Casual Friday fundraisers to benefit the Cystic Fibrosis Foundation, serving on a local non-profit board, or simply helping out a colleague in crisis. There is a culture of service that permeates Community Bank.

Tackling economic development is a key component of that service. “We believe in helping the less fortunate,” said Mr. McCune. “But wouldn’t it be better if we could help there be less unfortunate people in our community?” In 2008, Community Bank was an early leader in the local energy boom. The bank wanted to make sure local businesses and entrepreneurs were able to benefit from this emerging industry, so it organized the Tri-County Oil and Gas Expo. The Expo brought together energy sector experts, local business owners, and government officials to educate and empower the southwestern Pennsylvania community on how to take full advantage of this new economic opportunity. The Expo was such a huge success that Community Bank followed up with tradeshows, networking opportunities, job fairs, and educational events.

From customer-directed charitable donations to employee-driven fundraisers to corporate-led economic development, it is clear that Community Bank believes in taking a 360-degree approach to philanthropy. Being recognized for that philanthropy is deeply meaningful to the organization. “It is one of the greatest honors we can receive,” Mr. McCune said of the Charles C. Keller Excellence Award for Corporate Philanthropy.  “It confirms our progress in giving back to the community that we serve.”