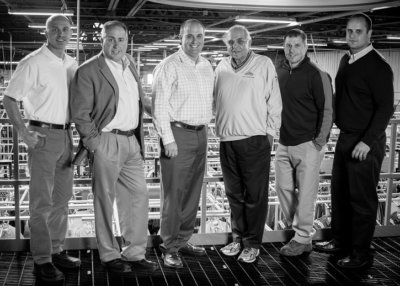 The LaCarte Family of Model Cleaners

Talking to Model Cleaners’ Dan LaCarte is uplifting. This is a man who takes his family-owned company’s mission to heart: Care for our customer, our community, and each other like family.

LaCarte and his brothers Dave, John, Joe, and Mike run the successful business started by their father Jack in 1986. The business has since grown to include the establishment of LaCarte Development Company in 1992 and the purchase of Stoney’s Brewing Company in 2017. But Model Cleaners remains the heart of the company. It has opened numerous new stores, acquired competitors, established a successful pickup and delivery service for more than 5,200 homes every week, and taken on uniform rental and industrial cleaning.

LaCarte notes, though, that this success was achieved following hardship and disappointment. His father Jack originally worked with his own father as a cattle farmer in the 1960s and 1970s while raising his growing family of five sons. It was tough, all-consuming work and ultimately ended with the sale of the farm and long-lasting financial difficulties.

Jack decided he wanted to create a viable family business his boys could one day join and run together. Model Cleaners became the means to achieve Jack’s vision, and today each of the five brothers runs an integral part of the business.

As the business grew, so did the family’s commitment to community-based activities, shaped in large part by its personal experience with adversity and the resulting desire to help others in need. “We’re part of a lot of communities and are out there in a lot of neighborhoods,” says Dan LaCarte. “With this business, we can touch a lot of people in the communities we serve.”

But the company’s hallmark event is its new Coats for Kids Competition. From 1992 to 2015, Model held a coat drive every November for the Salvation Army and collected approximately 2,500 coats a year. “Last year,” says LaCarte, “I thought, ‘We need to spice this up a little bit,’” and 2016 became year one of the competition. “I see on the news all the violence and all the hate that’s out there. You want to teach kids how to love one another, to treat one another with kindness and respect. So I said, ‘Let’s bring this down to the school district level.’ I wanted to create a competition among the schools.” He put collection bins in five local schools — Belle Vernon, Charleroi, Peters Township, Seton LaSalle, and Upper St. Clair — for students to fill with donated coats. Model collected the coats once a week, cleaned them, and posted the standings on Facebook. Students enthusiastically embraced the competition, personally posting on social media and spreading the news. Year one of Coats for Kids was a huge success, with 4,500 coats collected. Model donated the coats to local Salvation Army offices, churches, and district schools. “We donated $54,000 of free cleaning in eight weeks.” Upper St. Clair, the school with the highest number of coats collected, per student enrolled, won $1,000 from Model for their efforts.

Model will soon kick off the second year of the competition, which will run from November 6 through December 15.  Eight area school districts and a major local university are involved this year including North Allegheny, Seneca Valley, Mars, Seton LaSalle, Peters Township, Upper St. Clair, Belle Vernon, Charleroi and the University of Pittsburgh. The Pitt-Miami football game will be a Coats for Kids game, with bins on hand for fans to fill. Model’s goal for 2017 is to pick up, clean, and deliver 10,000 coats to area kids in need this winter.

LaCarte says, “You’ve got to be able to use the business as a platform to give back to people.” He’d like Model Cleaners to be known as a company that helps less fortunate children and perhaps helps get a family back on track by employing someone and promoting them internally. As for its legacy in the community, he hopes today’s young family members someday come on board and that Model continues to be “. . .that company that reaches out and really does live its mission statement daily.”