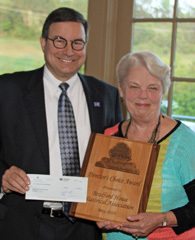 Tripp Kline & Rachel Gladden of the Bradford House Board

Tax collectors beware!  This year’s Director’s Choice Award was presented to a group of rebellion-leading, local history lovers collectively known as the “Bradford House Historical Association” (BHHA). The award included a $10,000 unrestricted Acorn Fund grant, which could purchase a considerable quantity of tar and feathers.

“When a small charity is faced with the news that its primary funding source is discontinuing its support, it could very well mean the end of that charity’s existence. But for this year’s recipient of the Director’s Choice Award, that news served as a rallying cry for its volunteers. Since receiving the news that the State would no longer be providing support to maintain the David Bradford House, the Bradford House Historical Association implemented new development strategies, such as the Whiskey Rebellion Dinner, which has become so successful that it was forced to move to a larger venue this year,” stated Betsie Trew, WCCF President & CEO. “These development strategies, combined with a greater attention to the Association’s finances, have resulted in an increase in net assets of approximately 47 percent.”

The Director’s Choice Award seeks to help a small but improving charity the way the WCCF was helped by its earliest supporters.

Eligible charities are required to have an operating budget of less than $250,000, have been in existence for at least three years, and provide a program in one of the six areas supported by the Acorn Fund – arts and humanities, education, environment and animal welfare, health and fitness, human needs, or religion and faith‐based.