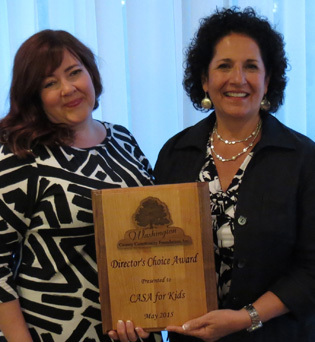 Who would speak for you if you were unable to speak for yourself? Some of the most vulnerable children in our community have a voice thanks to the work of CASA for Kids, the recipient of the 2015 Director’s Choice Award. The award included a $10,000 unrestricted grant from the Acorn Fund.

CASA for Kids is a local charity that trains community members to become Court Appointed Special Advocates who will speak up for the best interest of abused and neglected children in the Courts of Washington County. CASA advocate volunteers review records, research information, and talk to everyone involved in a child’s life, and then present their recommendation to the court as to what they feel is in the best interest of the child.

In 2014, local volunteers donated over 8,700 hours to their cases. Currently, there are 379 dependent children in the juvenile court system, represented by three part-time attorneys. CASA brings support to a strained child welfare system by using volunteers who spend more than 15 hours per month on every case.

During her acceptance speech, Vivian Osowski, CASA Executive Director, stated, “There are so many outstanding small non-profits in Washington County that do tremendous work; and, to be recognized by the WCCF for our financial status, as well as our growth and our programming, is an honor.”

To be eligible for the award, charities are required to have an operating budget of less than $250,000, have been in existence for at least three years, and provide a program in one of the six areas supported by the Acorn Fund – arts and humanities, education, environment and animal welfare, health and fitness, human needs, or religion and faith‐based.

“A review of the financial statements will show that CASA has been successful in securing sustainable revenues for its programs and is managing its expenses within those revenues. Careful management of financial resources has enabled CASA to grow and to increase its programming,” stated Betsie Trew, WCCF President & CEO. “Its annual Chefs for CASA is its largest fundraising event, which nets about $35,000 per year. And CASA has performed very well in both of our days of giving – $19,000 in 2013 and $32,000 in 2014. Those are some very impressive numbers for such a small charity.”

The Director’s Choice Award seeks to help a small but improving charity the way the WCCF was helped by its earliest supporters.