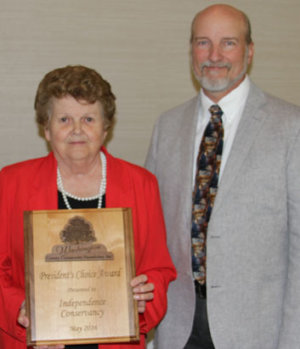 The President’s Choice Award, previously the Director’s Choice Award, was created to assist small charities in the manner the WCCF was helped in its earliest years by supporters who were willing to take a chance that a community foundation could be successful in Washington County.

For the first time since this award was initiated in 2008, the WCCF recognized the work of two nonprofits in the same year, the Highland Ridge Community Development Corporation and the Independence Conservancy.  Each organization received a $10,000 unrestricted grant from the Acorn Fund.

Their current project, the Langeloth Valley Conservation Area, near Burgettstown, will permanently preserve 73 acres of woodlands, wetlands and streams south of the former American Zinc & Chemical Co. smelter site.  The Conservancy has achieved over $1.5 million of environmental reclamation and land preservation since its founding in 1999.  With the help of community partners, land owners, volunteers and others, the Conservancy's vision is to protect and conserve land in the Raccoon Creek Region in perpetuity.

Noting her strong support for conservation and environmental preservation, WCCF President & CEO Betsie Trew noted that Independence Conservancy has stepped up to fill a void in land stewardship in Washington County and its work to mitigate mine and industrial threats to water supplies “impacts every living creature within the (Raccoon Creek) Watershed.”

To be eligible for the Award, charities must have been in existence for at least three years, have an operating budget of no more than $250,000 and operate a program in any one of the areas supported by the Acorn Fund, which include Arts & Humanities, Education, Environment & Animal Welfare, Health & Fitness, Human Needs, and Religion or Faith-Based programs.

Applicants are evaluated on three criteria, improvement in the organization’s financial position over a period of time, quality of programming, and community impact.