Off the Wall Theater 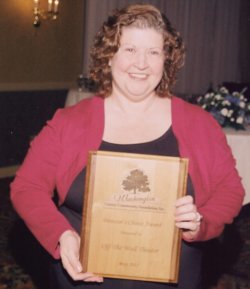 The Washington County Community Foundation (WCCF) is pleased to announce that its annual Director’s Choice Award was presented to Off the Wall Theater.  The award included a $10,000 unrestricted grant from the Foundation’s Acorn Fund.

Located at 147 North Main Street in Washington, Off the Wall Theater began operations in 2007.  Its mission is to enrich, enliven, educate and entertain, to be recognized as a cultural asset in the community, and to increase the public knowledge and appreciation of theater in southwestern Pennsylvania.

Hans Gruenert, Managing Director of Off the Wall Theater, commented, “This award will enhance our programming efforts and will help to ensure that we can continue to provide the best play selections, actors, directors, and technicians that theater has to offer.”

“Off the Wall has made notable progress in all three of these areas, but is excelling in the area of quality programming.” said Betsie Trew, WCCF President.  “We have seen first‐hand the quality of the plays produced at Off the Wall and we were very impressed with the reviews the Theater has received for its work, not only locally but in our region.”

Pittsburgh City Paper wrote, “First Class professional actors in high quality performances.”  Pittsburgh Post Gazette wrote, “Off the Wall is an ambitious little arts theater with a big appetite for challenging plays.”  The Observer Reporter wrote, “that this production eclipses one staged at Pittsburgh Public Theater 10 years ago is a testament to the quality of work coming from Off the Wall.”  The Observer Reporter also named the production of Kimberly Akimbo at Off the Wall, the “Best of the Decade.”   And finally, in its April 2011 issue, Pittsburgh Magazine ranked Off the Wall Theater number 5 in its “50 Fun Things You Must Do in the Pittsburgh Region.”