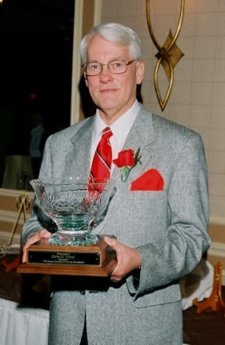 Barry Wood is the teacher we all wish we had in school. He exemplifies the criteria for the Howard Jack Outstanding Educator Award: “a local public educator who has displayed the ability to inspire children from all backgrounds and abilities, who has earned the respect of colleagues, students and parents, and who is actively engaged in the community.”

The credentials and accolades for the 38‐year veteran English and Theater teacher at Peters Township High School (PTHS) read like a manual for aspiring teachers.

Named to the Teacher Excellence Center’s Hall of Fame in Pittsburgh, Wood was also a nominee for the Disney Teacher Award and was invited to the American High School Festival in Scotland. He established Thespian Troupe No. 185 and the Peters Dance Company, and his theater program is widely recognized as one of the best in the state. Many of his former students, taught to his exacting standards, have found careers in the performing arts.

Barry is from Pine Grove, Pennsylvania, and received a Bachelor’s degree from Berea College, and Masters degrees from Ohio University and the University of Pittsburgh.

In 1971, Peters Township High school principal Dr. Howard Jack interviewed Barry and hired
him.  In 2004, Dr. Jack said, “It was my privilege to bring Barry to Peters Township. Its curricular activities and programs were greatly enriched thereby.”   His students agree, naming him their “Most Memorable Teacher” many times.

Barry shares his theater skills with the entire community. He taught or directed for Carnegie‐
Mellon University, Penn State University, Washington and Jefferson College and Waynesburg University, is a founding member of The Washington County Theatre Guild, and is currently directing/choreographing his latest production for Washington Community Theater, Disneyʹs
ʺBeauty and the Beastʺ which will be staged at Washington Parkʹs Main Pavilion June 23‐
28.

His commitment to the greater community is also exceptional. He is a Deacon and Elder at
First Presbyterian Church 1793 in Washington, and conducted major fund raisers for Citizens Library, the Greater Canonsburg Lions Club, the Chartiers‐Houston Public Library and the Flood Victims of Houston.

If theater is his first love, film is his second.  “I have spent my life at the movies and have decided that if I ever wrote a biography it would be appropriately titled:  ‘The Boy Who Spent His Entire Life At The Saturday Matinee.’”  His idea of a great afternoon:  watching a Jeanette MacDonald/ Nelson Eddy marathon.  (For the younger generation, they were singing stars of the 1930ʹs.)

Barry is thrilled to receive this award. “I am elated to be the first teacher to receive this distin‐
guished award especially since it was Dr. Howard Jack who hired me to teach and direct at Peters Township High School.  He was‐‐and continues to be‐‐an inspiration to me.”