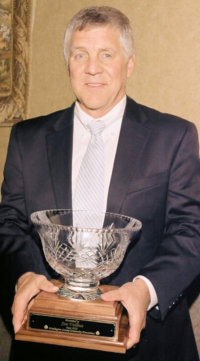 If someone had to describe you, what words would you hope they would use? Character? Integrity? Honesty? Values?

Those are the words that come up, time and time again when Jon Vallina’s boss, coworkers and students describe him. While his students’ athletic achievements are impressive, it was the impact of those words that led the WCCF to name him the 2012 Dr. Howard Jack Outstanding Public Educator of Washington County.

A lifelong resident of Burgettstown, Vallina has spent 37 years teaching physical education, coaching, volunteering in the community, and helping keep the PIAA on track.

“He conveys a sense of honesty and integrity and motivates those around him through his tireless work ethic,” says Andrew I. Miller, a former student and current Burgettstown parent.

“I cannot think of anyone I have worked with in my 34‐year career who has done more as a teacher to positively affect the lives of generations of youth both in the classroom setting and outside the classroom and in the community,” writes Burgettstown Superintendent Deborah Jackson.  “He is the consummate role model for young people.”

Student Andrew Miller recognizes his extraordinary time commitment: “Mr. V is the first one in
the school and the last one out, but most of the time I believe that he is there longer than the janitors.” When Jon heard of his nomination, he said, “It feels great to be appreciated by the administration, parents and my students.”

Now retired from the classroom, Jon just can’t stop serving, continuing his duties as Burgettstown’s Coordinator of Student Activities and Athletic Director. He can’t remember a
time when he did not want to teach, and that desire began at the same high school where he spent his entire professional career. His was the first class to graduate from the current Burgettstown High School, and after four years at Slippery Rock University, he returned home to give back to his community.

He sees needs and tries to fill them. Because video games and a sedentary lifestyle were sapping the health of his students, he requires them to work out twice a week, using a fitness program tailored to them. Students who would not think of taking on strenuous physical activity are changing their lives. He also led a team from BHS to the National Fitness Championships in California.

He doesn’t teach his students facts; he teaches an attitude. His philosophy of teaching is also his philosophy of life.  “Whatever I do, I lead by example.” Superintendent Jackson agrees. “Jon’s philosophy is that students should be prepared to continue a life of fitness and healthy living. Not only does he teach it, he lives it.”

His commitment goes well beyond the classroom. He was instrumental in having the athletic
training facilities, including the swimming pool and the fitness center, opened to the community.
“My goal has been to make Burgettstown a better place. I’ve accomplished that.”