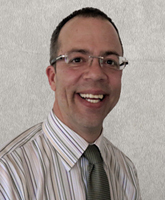 How would you describe your middle school experience? Awkward? Dreadful? Overwhelming? Chances are, it’s a stretch of time you’d rather forget.

But, ask a student of Matthew Cheran’s, and the answer may surprise you.

“There is no teacher quite as mindful as Mr. Cheran of the specific feelings of each and every student, making it seem as if he doubles as a guidance counselor . . . I am confident, as anyone else who has had Mr. Cheran is, that he inspired me, leaving no doubt that I am in fact a better person having met him,” stated 2014 graduating senior Max Lindsay.

Although teaching is his passion, it hasn’t always been Matt’s career. The tragic events of September 11, 2001 caused him to reevaluate his life, leave a successful job in insurance case management, and follow the call of the classroom (which meant spending nearly two years as a full-time company President and full-time education student). In 2004, he was hired by Peters Township, and the rest has “been a dream.”

It is not easy to be a child in today’s hyper-competitive world. However, Matt strives to treat these kids like kids by offering them vital emotional support and a first-rate education.

Visit his social studies classes, and you will not find students memorizing important dates, events, or figures. His lessons are about telling the story of history. Participants discuss themes and concepts, as well as current events, in ways that make their lessons both interesting and relevant to their studies in other disciplines. They also greatly enjoy his grand history reenactments, such as those based on the immigration process at Ellis Island or the Oklahoma Land Rush.

“Education is nothing like it was 30 years ago. Now, you have to be part entertainer and try to keep them engaged for those 41 minutes . . . It’s like you’re on stage.” Matt takes his responsibilities as a role model particularly seriously, but he also believes it is important for students to see him as a person. They’ve laughed together; they’ve cried together. Building that relationship is paramount.

Outside the classroom, Matt broadens his students’ perspectives by taking them beyond their “bubble.” He will arrange for them to host food drives and then help distribute the donations on the weekend. Once, a pantry client recognized Matt and greeted him with a hug. His students were “blown away” when they realized those in need are not always strangers.

While he claims to be “the worst singer on the planet,” his enthusiasm surely must make up for what he lacks in talent. Often Matt will be asked to make guest appearances in school musicals, emcee special events, and give play-by-play commentary at games. And all of this is in addition to regular afterschool tutoring, coaching the forensics team, and serving as President of the Peters Township Education Foundation.

At the end of school year, Matt stands in front of his class and delivers a special, personalized message to each of them – highlighting that student’s strengths and his hopes for him or her. His powerful words resonate far beyond that day. At graduation, it is not unusual for former students, now young men and women, to approach him and share how those comments from years ago helped them come into their own.

This year marks Matt’s 10th anniversary in education, so the timing of Dr. Howard Jack Outstanding Public Educator Award has been impeccable.

“Teaching is an investment, it’s a lifestyle, and the kids know when their teachers are putting everything they’ve got into the job,” he remarked. “This award is external validation for what I do every day – making a difference, making an impact. It is so humbling."