Melanie Sandrock is a music teacher extraordinaire, and as the recipient of this year’s Dr. Howard Jack Outstanding Educator Award, is being recognized as a public educator who has displayed the ability to inspire children from all backgrounds and abilities. Sandrock, who teaches chorus, guitar, the Celtic harp, and music, is remarkably modest and reluctant to talk about herself. She is, however, generous in giving credit to her mentors, administrators, and fellow staff members.  But her main focus is her students and their accomplishments. 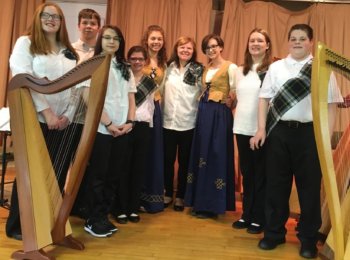 Melanie Sandrock, center, and members of the Ringgold Harp Ensemble

Sandrock graduated from Bethany College in West Virginia with a degree in music education, and with the exception of one year spent teaching elementary school immediately following college, she has spent 41 years teaching at Ringgold Middle School in Finleyville, Pa.

She initially envisioned teaching music at the high school level. “The goal of most graduating music teachers is to be a high school music teacher,” she notes. “But that was my plan. This is God’s plan, which is better than what you think. It’s neat when you realize this is where God wants you to be. And when you’re where God wants you to be, you’re in the right place.”

Sandrock has clearly been in the right place, inspiring, guiding, and encouraging her students, helping them to discover talents and abilities they often didn’t know they had. Middle school, she acknowledges, is a tough time for kids, and in many ways is more difficult than high school. She empathizes with her students, who are going through many changes, and while “they all eventually blossom, some have a harder time than others.”

Asked what she finds particularly rewarding about the profession she clearly loves, Sandrock says, “There is so much rewarding about these kids who select my class.” Some students “don’t have a place, and everybody needs to have a place to belong.” Also, music fosters a sense of pride in her students, whether they are performing on stage or working behind the scenes, and she loves to see their pride in what they have accomplished.

Sandrock has played a large role in the evolution of the school’s music program, which includes the Ringgold Harp Ensemble. Years ago, one of her students, who knew she played the Celtic harp, asked if Sandrock would teach her to play after school. One student quickly grew to a group of 10, and eventually the after-school program became an official class. Today, the ensemble includes both junior and senior high school students and has competed at the Highland Games at Ligonier; performed at Monongahela Valley Hospital for the United Way luncheon; auditioned and performed at a large showcase concert in Hershey, Pa., for the Pennsylvania State School Board and Superintendents Convention (one of just two western Pennsylvania schools there); and performed at numerous other events.

Sandrock also works with the school’s string band, the Rustic Rhythms, and its show choir, which is performing at Disney World this year. Many of her students have gone on to careers in performance: several are at Disney World, and one works with Ringling Bros. and Barnum & Bailey Circus.

“Music,” she says,” has always been part of my life.” Sandrock’s mother is a pianist and church organist. There was always music in her home, and her parents always supported her. Her husband, Brad, and her two sons, Brent and Ben, have been equally supportive during her career. “My family never missed a concert or a show, ever.” She proudly mentions budding musical talent in several of her grandchildren.

As for how long she will continue to teach, Sandrock says, “However long God wants me here.” And while she takes none of the credit for her amazing work, coworker Dawn Mason, who nominated her for the award, wrote, “Her positive demeanor radiates throughout the school, both in her class and in the extracurricular events she sponsors.” Her many students, past and present, would undoubtedly agree.