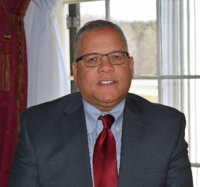 Heroes are powerful. They enlighten, they embolden, and most importantly, they inspire. Few of us are afforded the opportunity to meet those who influence our lives so profoundly.

But Robert C. Griffin is an exception.

Not only did Bob have the unique privilege of working alongside one of his heroes for 15 years, but he will soon receive an award for perpetuating the legacy of the extraordinary man to whom he refers to as “my North star.”

The enormity of it leaves Bob at a loss for words.

“There wasn’t a person in the world who Mr. Waller wouldn’t help . . . and he saw something in me,” he attests. “So, being recognized in this way, it’s all coming full circle.”

The connection between the Griffin and Waller families extends decades – long before Bob’s stint as Vice President at Waller Corporation. In fact, Bob’s parents, the late John and Joan Griffin, were community leaders in their own right. Although his father died a young man, Bob has memories of him tutoring students in the family living room and helping to reopen the LeMoyne Center’s swimming pool. His mother Joan successfully finished raising five children by herself and still found time to tirelessly serve the community through boards and civic groups, including the Washington Hospital Board of Trustees and Washington School District School Board.

Bob reflects, “I learned about service early in life from my parents, but I didn’t really fully understand what they were doing until I was older.” And almost instinctually, when there has been a need for him, he has been ready to answer the call.

Spurred by Lou Waller’s inspirational mentorship, many of Bob’s service activities have been focused on helping disadvantaged youth build a better future for themselves. He was Board President of Blueprints (formerly Community Action Southwest) and remains a proponent for the charity’s education efforts, especially through programs like Head Start.

He has been involved with the Abernathy Black Community Development Education Fund, which supports the education of young black students.

Additionally, he has spent years supporting the Mel Blount Youth Home, a charity that in recent years has expanded its focus from exclusively helping troubled teens to youth leadership development on a broader level through its Youth Leadership Initiative. Bob especially likes that the charity champions the values that Lou Waller extolled.

And just a few of Bob’s other volunteer roles have included coaching youth sports and serving as Deacon at First Presbyterian Church 1793.

With character and commitment, Bob has not only followed in the footsteps of Lou Waller – he has blazed a trail of his own that has enhanced the quality of life in this community for so many.

Bob remarked: “Finding ways, no matter how large or small, to help people – that is why we’re here. Mr. Waller was a man of deep faith and taught me that the best way to honor God is through servant leadership and helping others."