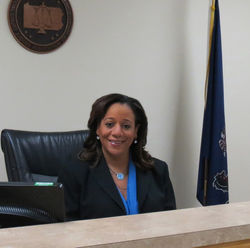 Some people have big hearts. Others have warm hearts. And many have broken hearts. But, Traci McDonald has the rarest of all – a heart of gold. It’s a special distinction that has earned her this year’s Louis E. Waller Humanitarian Award.

“I had such respect for Lou Waller. Our families were close, and I grew up with him as a mentor…In fact, I started my involvement in the community because of Lou,” she remarked. “What a blessing and an honor to be recognized with an award in his name.”

Traci is also grateful for the guidance of her parents, James and Joan McDonald, as well as Joan Griffin, crediting all these local leaders with helping to shape her into the person that she is today – someone whose reputation for diligence, compassion, and commitment often precedes her.

You may recognize Traci as a Magisterial District Judge, a charity board member, or even a prior ATHENA Award recipient. Or, you may know her as someone who has always fought hard for those who have been hurt, abused, and exploited.

For 15 years, Traci was a skilled Assistant District Attorney who served as the head of the Domestic, Sex Crimes, and Child Abuse Unit of the Washington County DA’s Office. It was a position that was about so much more than securing justice. When Traci started to notice gaps in the process and needs that weren’t being addressed, she took action.

For instance, those outside the criminal justice system probably aren’t aware that immediately following an attack, rape victims must surrender every article of clothing on their person to the investigation. Although important evidence was being collected by law enforcement, traumatized victims were being left with the shame of having nothing to wear but hospital scrubs. Seeing this as “something that could be fixed,” Traci rallied support from local service organizations, such as the Zonta Club and the Women of Philanthropy, to collect jogging suits and care packages that would offer just a little bit of comfort to those in a truly horrible situation.

But more often than not, Traci spent her days as an ADA working hard to build a trusting relationship with victims, many of whom had never experienced the care and support she offered.

It would be impossible to determine how many victims, or future victims, Traci’s good work in the DA’s office has impacted. “I gave my all while I was there – blood, sweat, tears, heart, and soul . . . If I helped one person, that’s enough.”

That same level of commitment extends to her charitable activities, which have benefitted organizations such as the ABCDE Scholarship Fund, Village of FPC, Pathways, Literacy Council of Southwest PA, Community Action Southwest, United Way, Washington Health System, and the WCCF.

"My mother was a big inspiration for me in teaching care and compassion for others by example . . . I have a passion for helping the most innocent of our world. Children are our future.”

One children’s charity that holds a special place in Traci’s heart is Jameson’s Army, which was founded by a local family to raise awareness and funding for children affected by congenital heart defects. From the name of the charity (her daughter was named “Jameson” to honor her father) to the work that it does (heart conditions have also impacted her family), Traci felt a connection. She particularly likes the therapeutic pillow program. Although it seems simple, it is one way Jameson's Army is making a big impact. Since heart surgery causes coughing, the extra support from the pillow can help these patients' little bodies heal more comfortably.

After all, at the heart of Traci’s humanitarianism is an overwhelming desire to give others the support they need when they need it most.