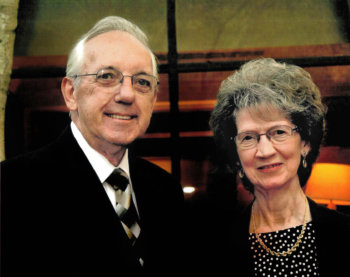 Alvin and Carol Berthold* first became aware of the WCCF in 2005 by reading a story in the Observer-Reporter about a special $100,000 Decade of Service grant cycle initiated in celebration of the Foundation’s 10th year of operations. Lifelong Washington County residents, the Bertholds liked that the Foundation’s grants were focused on improving the quality of life in Washington County.

Over the years, Alvin and Carol made many gifts to the WCCF, oftentimes anonymous, including a $50,000 gift to the Arts Fund, which helped to secure a $125,000 one-to-one challenge grant from a private foundation. The fund’s purpose appealed to Carol, who danced from her youth into her golden years. “I’m not a very good dancer,” she often said, “but I love the movement of dance, especially ballet, which always gives me great joy.” To enable others to experience the joy of dance through post-secondary study, she created the Carol Berthold Scholarship Fund for Dance with a $360,000 testamentary gift.

Alvin, devoted to the McDonald Presbyterian Church, was instrumental in having the McDonald Presbyterian Church Fund created at the WCCF in 2010 by the transfer of two existing trusts which had been created by Carol’s father. Alvin died in 2012, but Carol continued to support this fund until her passing in 2019. In her will, Carol provided for a $650,000 gift to this fund, which will provide annual grants to the ministry that was so important to Alvin.

History and heritage were also important to the Bertholds, and led to Carol contributing the first monetary gift (an anonymous gift of $50,000) in 2013 to create the Brownlee House Building Fund. She later provided an anonymous $200,000 challenge gift for the Brownlee House Preservation Fund and then contributed another $50,000 by bequest. Carol said that she and Alvin had considered purchasing the Samuel T. Brownlee House some years ago, but that she couldn't bring herself to leave her hometown of McDonald.

The most significant gift from the Bertholds supports the Alvin and Carol Berthold Fund, a hybrid designated/discretionary fund. Twenty percent of the annual grant-making amount of this approximate $5,000,000 fund will be issued as grants to eight designated charities whose missions resonated with Alvin and Carol. The remaining 80 percent of the annual grant-making amount will be awarded to charities at the Foundation’s discretion.

In honor of the Bertholds and in celebration of the Foundation’s 25th year of operations in 2020, the Alvin and Carol Berthold Fund issued grants to 25 local charities through a special $150,000 Charity of Excellence grant cycle.

It was local grant-making that attracted Alvin and Carol to the WCCF 15 years ago, and hopefully they would be pleased that their generosity will continue to address some of our community's most urgent needs now and in the years to come.