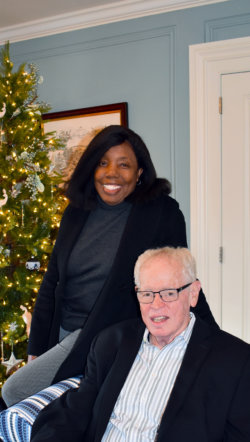 As a woman rushes into Washington Hospital’s CARE Center for Family Birth & Women’s Health, she doesn’t notice the Precision Marshall sign on the wall. Her thoughts are on her baby, about to burst into this world, not about the donation that provided a birthing space that meets her every need.

A teenager sits down with a tutor at LeMoyne Community Center. He struggled with academics, but he will graduate. He has never heard of Jackson Milhollan, but the former board member supported the programming that makes this miracle possible.

It is no surprise Jack Milhollan is a force for good in the community. It’s part of his family culture, where dedication to community service was handed down from father to son.

“Chip off the old block? Not even close to what my dad gave to the community,” he admits. “He set a very high bar.”

The philosophy is simple: If you have the talent, health, or financial ability to help others, you have an obligation to give something to the next generation. “I absolutely believe this.”

The list of the organizations he has supported with time or financial resources is impressive, but he’s not comfortable drawing attention to himself.

WCCF President and CEO Betsie Trew confirms it. “Jack is very humble about his giving and community involvement. But he genuinely cares about the community.”

Like his father, Jack believes in supporting our local hospital, which provides treatment regardless of economic status. Washington Hospital Foundation Executive Director Sara Schumacher says, “Jack has always taken a personal interest in the hospital.” He knew his employees and their families’ health needs were well served locally.

One of his favorite organizations is Your Child’s Place, which serves children born with physical limitations. He was touched by the work, but doesn’t want to take all the credit. After mentioning he was one of the founders, he is quick to add, “I hope I’m not saying too much!”

“When young people do better with their lives, it benefits the community. They’ll learn to make a mark in different ways,” Jack says of their work in assessing students for scholarships. “What these students do helps the community, here or elsewhere.”

Jack and Donna also participate in the Washington County Community Foundation’s day of giving, because they like the idea that there is one place, one day where you can serve many different interests.

In recognition of their generosity and community involvement, Jack and Donna Milhollan received the 2021 WCCF Northrop Family Excellence Award for Community Philanthropy. The award was known as the Philanthropist of the Year Award when Jack’s father, Tom Milhollan, received it in 2000. But the primary criterion remains the same, demonstrated exceptional generosity, relative to one’s ability to give, through personal financial gifts to local charitable causes.

Jack Milhollan’s definition of a worthy cause? Something that serves the overlooked or underserved.

“If I was down to my last dollar, I’d give it to the LeMoyne Community Center.”

In supporting so many community needs, the Milhollans rarely see who benefits – knowing they did is all that matters.