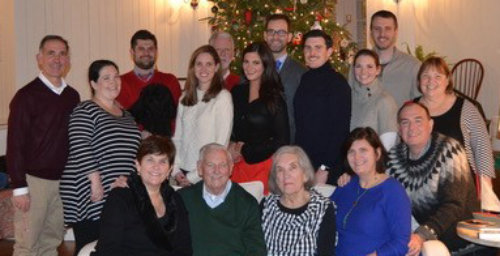 There are few families in the region who have made such a broad, long-standing impact on local philanthropy as the Northrop family, particularly during their 116 years of ownership of the Observer-Reporter and Observer Publishing Company (OPC).

“To be a successful community newspaper, you need to be part of the community,” remarked Thomas P. Northrop, who served as President & Publisher of the Observer-Reporter. And to the Northrop Family, being a “part of the community” has always meant being involved in charitable giving and service.

Over the years, countless charitable organizations and activities have received generous support from the Northrop Family either directly or through the OPC and its employees. Just a few include: United Way, Leadership Washington County, Washington Hospital Board and Washington Hospital Foundation, Washington & Jefferson College, Waynesburg University, PONY Baseball, Newspapers in Education, Whiskey Rebellion Festival, as well as the Washington, Waynesburg, and McMurray Rotary Clubs. Additionally, for more than 30 years, staff members have helped to provide those in need with Thanksgiving meals through the 2000 Turkeys campaign, which was founded by an OPC employee.

At the direction of the Northrop Family, the paper has covered the local non-profit community extensively: running news articles on programs, fundraising efforts, and awards, as well as donating advertising space. There is no way to quantify the benefits of that publicity.

Without a doubt, the Northrop family’s support has been instrumental in the Foundation’s growth “from acorn to oak.” Not only was the family a driving force behind the creation of the WCCF, but through generous operational support in those early years, the Foundation was set on a path for future success.

For its incredible commitment to corporate giving, the OPC was awarded the WCCF’s Charles C. Keller Excellence Award for Corporate Philanthropy in 2014. Both John Northrop and Tom Northrop have served as Chairman of the Foundation’s Board of Trustees. Additionally, both John and Rose Northrop and the Observer Publishing Company have attained the prestigious “Founder’s Circle” status in the WCCF Family of Founders. The WCCF is also grateful for the generous support from other members of the Northrop family.

For the Northrop family, community philanthropy is an inherited trait that can be traced back to Tom Northrop’s great-grandfather, John L. Stewart, who led the charge nearly a century ago to raise money for the Washington Hospital which was struggling financially at that time. Stewart’s widow, Margaretta Stewart, continued her husband’s commitment to the community by serving as a driving force behind the preservation of the David Bradford House in Washington more than 50 years ago, as well as numerous other community causes.