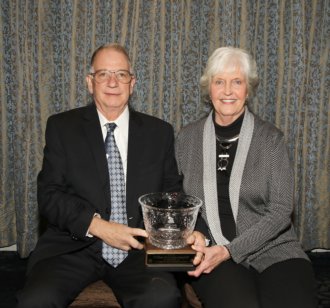 Steel is an incredible material, serving as the frame, base, or core for countless items we use every day. Not only has steel been the heart of the Pittsburgh region, it has been the center of the Campbell family’s life for many years.

Camalloy, a stainless steel distribution operation founded by Bill’s father, Jack, has been a part of the Washington County landscape since the 1950s. While working for his family’s company in Florida, Bill met Carolyn, then an elementary school teacher. They married on a snowy Jacksonville day in January 1977 and moved to Washington County the following year to be closer to Bill’s family.

Not long after relocating, the young couple began attending First Presbyterian Church, 1793 (FPC). It has become an integral part of their philanthropic efforts ever since. Not only is Bill on the session and FPC’s Treasurer, he has served on many committees and helped to raise funds for the historic building’s renovation.

In the 1980s, Carolyn, a young mother at the time, wanted to do something meaningful for her community. Friends and fellow congregants developed an idea to help feed those in need. Carolyn reflects, “We had fun with it . . . We got the donations and sorted the food, all the while the kids would be running around. We would also have cheese distributions. Then, it grew.” Today, that grassroots feeding project is known as the Community Circle Food Pantry.

While President of Camalloy, Bill was steadfast in his support of the local charitable community through the company. Although he retired from this role in 2013, Bill still vividly recalls, “We had our ups and downs. And when we had some very good times, we felt it was important to share our success.” Camalloy was an ardent supporter of the United Way workplace campaign, and Bill’s commitment to United Way led him to a Board Chairmanship from 2003 to 2005. For his dedication, he was named the inaugural recipient of its Liza N. Beale Loyal Contributors Award in 2010.

The couple also has generously supported Presbyterian SeniorCare. In addition to currently serving as Presbyterian SeniorCare Foundation’s Chairman, Bill is Capital Campaign Chairman for the new Woodside Place of Washington facility, which will specialize in caring for those with Alzheimer’s disease or related dementias. The project recently hit its $3 million goal.

Carolyn too has lent her time and talents through her involvement in the “Your Holiday Home” fundraiser. The proceeds of this activity benefit the SeniorCARE FUND for Washington campus resident who have outlived their resources to pay for care.

Together, the couple has helped to successfully fundraise hundreds of thousands of dollars for worthwhile causes. But they agreed: “You can’t do it alone . . . We have always considered ourselves to be fortunate to be around good people.”

With her Southern charm and generous heart, it’s not hard to see why Carolyn has also become a deft “friend-raiser,” encouraging those closest to her to join in her charitable activities. She has personally been responsible for numerous additions to the Community Foundation’s Women of Philanthropy Giving Circle. Carolyn remarked, “I’d like to see the Giving Circle continue to grow . . . Learning about the local agencies that serve disadvantaged women and children, I became much more aware of our community’s needs.”

Additionally, Bill is a former WCCF Board Chairman. Under his leadership, the Foundation secured the donation of the historic Samuel T. Brownlee House and initiated WCCF Gives, the annual day of giving event which has cumulatively raised well over $5 million for local charities.

Like steel, William and Carolyn Campbell have provided structure, guidance, and support, often behind the scenes, to diverse philanthropic causes in Washington County. Their contributions have helped many local charities build solid foundations, grow stronger, and reach heights they never knew were possible.