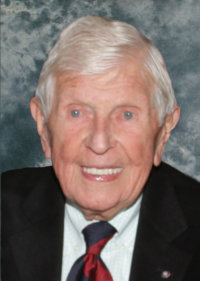 If you live in Washington County, your life has been influenced by Andy Uram.

Have you attended a Washington Symphony concert?  Andy and his late wife, Julie, were early supporters of the organization.  Do you know a Boy Scout?  Chances are he’s camped at Heritage Reservation’s 2000 acres in the Laurel Highlands.  Uram helped convince Mellon Bank to donate the land for the camp.  Do you own a small business?  He has served as Director of the Chamber of Commerce.  Know a person with a visual handicap?  He is a great supporter of the Guild for the Blind.  Borrowed a book from Citizen’s Library?  He served on the committee that built the building.  Donated to the United Way?  Under his oversight as Chairman, the local United Way raised $1 million for the first time.

When Andy Uram decides to support a cause, he goes all in, and becomes such a valuable volunteer he often ends up as either Chairman or President. But that’s not how his volunteer career began. Way back in 1936, fifteen-year-old Andy volunteered for the Citizens Military Training Camp.

“You were supposed to be sixteen,” he admitted with a slight grin. “I spent one month at Fort Meade in Maryland doing all the regular military training, like how to handle a gun.”

His mother had a great influence on her son’s attitude towards giving.  “During the Depression, when no one had anything, my mother taught me ‘It’s better to give than to receive.’  That became part of my personality.  It ended up as my philosophy.”

He is a member of the Washington Rotary, and takes its motto, “Service Above Self” seriously.  The Rotary club became involved in helping the Rotary Club of Ghana (Africa) via a multi-club effort that sent one million books to that country.  The Ghanaian ambassador to the United States said, “I can’t believe people we don’t know did so much for people they never
saw.”

That stuck with Andy.  “You don’t have to know the people as long as you know you are helping. There is a great satisfaction knowing you are helping legitimate receivers.”

Andy loves his community, and his community loves him back. The Jaycees gave Andy and his late wife, Julie, the Distinguished Service Award.  The Boy Scouts named him a Silver Beaver, their highest local honor.  The Rotary Club of Washington not only gave him an international service award, they named the award in his honor. The Andrew G. Uram International Service Award recognizes a local individual who has provided humanitarian relief abroad or worked to promote world understanding and peace.

He has been raising money for worthy causes for many decades, and he is sad to see how fundraising has changed.  “It used to be one-to-one, one person calling another, making direct contact.  Now there’s more politics and more computers; it’s not as personal.”

His legacy?  “I hope I influence people to want to help others.”