The following article, written by Michael Bradwell, was printed on the front page of the Observer Reporter on November 12, 2012.

When Armand Dellovade builds, his company works on large-scale projects, many of them national in prominence and name recognition.  In its 40‐year history, Canonsburg‐based A.C. Dellovade has helped to build scores of high‐profile sports, aerospace and commercial projects around the country.

Think Heinz Field and PNC Park; the New York Giants’ Meadowlands Stadium in New Jersey; the Air Force One building at Andrews Air Force Base in Maryland; Cape Canaveral in Florida; and the Houseton convention center.  Working with some of the country’s biggest construction companies like Turner Construction and Bechtel Corp., his crews install metal roofing and siding, making Dellovade one of the largest subcontractors working in specialty metal siding installation.

But when it came to giving, Dellovade, who was the Washington County Community Foundation’s 2012 Philanthropist of the Year, was much more local in scope.  When he was honored at WCCF’s annual banquet at the Hilton Garden Inn, Southpointe, Dellovade will be noted for his giving to nonprofits and charities in Western Pennsylvania. 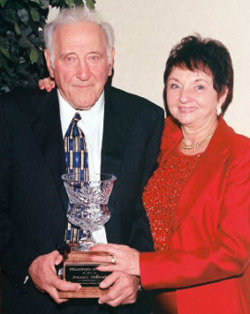 Armand & Marilyn Dellovade at the 2012 Philanthropy Banquet where Armand was honored as Washington County's Philanthropist of the Year.

It’s a tradition that goes back nearly 40 years, when he began giving to the University of Pittsburgh’s booster organization.  “In the early ’70s, I joined the Golden Panthers,” said Dellovade. “I had some complaints and thought they could change a few things. I was told, ‘If you want the right to complain, make a donation.’”  In addition to the Pitt’s Golden Panthers, Dellovade has given considerable support to the Cleveland Clinic and the Italian Hall of Fame in Chicago for a building to honor Italian athletes.

But the bulk of his giving over the years has focused on myriad local projects, nonprofits and charities.  He was a major donor to the capital campaign for the Frank Sarris Public Library and has supported Try‐Again Homes, Community Action Southwest, the Washington Hospital Foundation, Pathways of Southwestern Pennsylvania and numerous local youth sports teams.  Alex Paris, of Alex Paris Contracting in Atlasburg, who was among those who recommended Dellovade for WCCF’s award, said the Avella native has never forgotten his roots, despite his business success.

“He never forgot where he came from, and he never forgot the people here,” said Paris, who noted one of Dellovade’s metal fabrication shops remains in the area.  “He’s employed a lot of people, and he gave them a lot of opportunities.”  As for giving close to home, Paris said Dellovade has given much to Avella High School’s football boosters and its athletic programs “and continues to do so. Anytime anybody’s asked, he and his company have made a contribution.”

Despite the range of his contributions, Dellovade said he doesn’t follow a strict criteria for giving, other than that the organization or institution has meaning for him.  For Dellovade, a few rise to the top of his donor list for obvious reasons.  “You give to your church, the school you went to, the culture you’re from and the hospital that can save your life.”

His recommendation to someone considering a philanthropic contribution?   “Give it out of your heart and who you want to give it to and how much you can afford to give. A lot of people out there need it.”  Humility also is a consideration for Dellovade.

Despite the number of high‐profile projects A.C. Dellovade has worked on over the years, he acknowledged his company doesn’t seek publicity.  He feels the same way about his philanthropic work. He doesn’t seek or care about the accolades.

“If your name doesn’t pop up, don’t let it bother you,” he said. “We’ve always kept (donations) quiet.” “There are no airs about Armand. What you see is what you get,” said Brian Smith, president of Washington Financial, who also nominated Dellovade for the philanthropist award.  What Smith sees in Dellovade is an unwavering loyalty and generosity for whatever charitable cause comes his way.  “He’s one of those guys that if you need a foursome for a United Way golf tournament or some other charitable event, you can always count on him and his company.“  Dellovade, 74, was born in Avella and graduated from Avella High School in 1957.

He attended the University of Pittsburgh from 1957 to 1960, studying engineering, but left college to begin his career as an ironworker for Plasteel Products in the early 1960s.  After learning every aspect of the business, he established his own company, A. C. Dellovade, in 1973. Today, the company is the country’s foremost metal roofing and siding contractor, installing specialty siding, including the assembly buildings at Cape Canaveral and the MX Missile Space Shuttle Complex at Vandenberg Air Force Base.

In 2008, he was honored with the Humanitarian Award from the Washington‐Greene County Chapter of the Pennsylvania Sports Hall of Fame.  “His generosity for charitable causes is substantial,” said Pete Dellovade, A.C. Dellovade vice president and brother of the honoree. “From the inception of the business, generosity is part of his life.”