The following article, written by Michael Bradwell, was printed on the front page of the Observer Reporter on November 15, 2009. 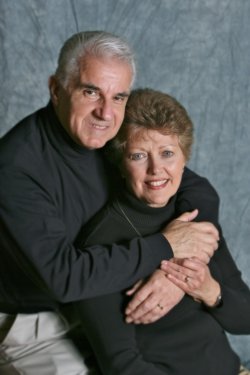 When Dr. Angelo Armenti and his wife, Barbara, arrived on the campus of California University of Pennsylvania 17 years ago, one of the first things they decided to do was to establish a scholarship for its students.  ʺWe saw a need for scholarship assistance for our students,ʺ said Armenti, who as president of one of the largest state‐supported universities in Pennsylvania, has watched as changing demographics across America have altered state funding priorities for colleges here and in other states.

ʺThat makes it imperative to raise scholarship money, and we realized that we needed to set an example,ʺ said Armenti.  That initiative, along with others that encourage Cal U students to give back some of their time and talents as a charitable act, have earned the Armentis the title of 2009 Philanthropists of the Year from the Washington County Community Foundation.   The couple will be honored Friday with a dinner at the Southpointe Golf Club. WCCF will establish the Dr. Angelo & Barbara Armenti/Cal U Scholarship Fund.

The first scholarship the Armentis established was in honor of Angeloʹs parents; the second one honored Barbaraʹs parents.  ʺAs a couple, we both come from very humble beginnings,ʺ he said. ʺMy parents came to America as children, and Barbaraʹs father was a coal miner.   ʺIt was a great way to keep alive the memory of loved ones,ʺ Armenti said, adding that over the years, he and his wife also began funding scholarships at Barbaraʹs high school in Shamokin, as well as at Westinghouse and Peabody high schools in Pittsburgh to honor Cal U graduates who
went on to become principals at those schools.

Armenti said the coupleʹs charitable acts evolved from the way they were raised.   ʺWe were both raised in loving families where there were old‐fashioned values: Be responsible, sensible, frugal and be compassionate to those less fortunate than yourself,ʺ he said.

Barbara Armenti chairs the Mon Valley United Way campaign, volunteers with the American Heart Association and raises money for a variety of local organizations.  ʺI love being involved,ʺ Barbara said. ʺIt has afforded me the opportunity to meet wonderful people.ʺ

Perhaps the coupleʹs biggest contribution, however, comes from their work in getting Cal U students to see the importance of giving, which Armenti refers to as an act of ʺpaying it forward.ʺ   ʺWe want students here to be grateful for what is given to them,ʺ he said, adding that he tells them they are able to attend college because of what the stateʹs taxpayers pay for higher education as well as because of the contributions of private donors and parents and teachers who have helped them get to where they are.

ʺThereʹs no such thing as a self‐made man or woman,ʺ Armenti said. ʺItʹs a myth. Students need to be aware of how they got to where they are and need to be aware of how fortunate they are to be living in America and have the opportunity to go to college.  We also want them to understand that every one of us has benefited from the love, generosity and caring of others.ʺ

The couple also sponsors an annual banquet on campus that introduces scholarship recipients to their benefactors in an effort to get them to appreciate the act of giving.  ʺObviously, the people who helped a student financially donʹt need to be repaid, but we want students to pay it forward to someone who does need help,ʺ he said.

While acknowledging that students donʹt have the financial means to be philanthropists, Armenti said he tells them they can ʺgive their time, talent and treasures when theyʹre called to,ʺ adding that ʺstudents can be philanthropists in a general senseʺ  by donating their time at a senior center, tutoring other students or volunteering in numerous other ways.

Charles Keller, a WCCF trustee who nominated the Armentis for this yearʹs award, said the couple has been involved in philanthropic projects since they moved to California in 1992.  ʺFrom the beginning, they were very active in the community and they were very generous as individuals,ʺ Keller said, adding that in addition to Armenti creating the first capital campaign at Cal U, his consistent message about philanthropy to students and faculty is one that will continue to deliver philanthropic acts far into the future.  ʺHeʹs always telling them to pay
it forward,ʺ he said. ʺHeʹs primarily responsible for creating an atmosphere of philanthropy at the university.ʺ

Gwendolyn Simmons, a WCCF trustee who also serves on Cal Uʹs Council of Trustees, said Armentiʹs approach to linking philanthropy to academic excellence encourages current students to see that future students will have access to higher education.   ʺHe lets everyone know that the university exists for the students and that every student has a responsibility to support the university in a way so that others will have the same educational opportunity,ʺ  she said.

The Armentis added that their giving rewards them as much as it does the beneficiary of their deeds. ʺThereʹs a lot of personal satisfaction,ʺ he said.  ʺWe really are rewarded many times from the good things we do for others.ʺ

The following article, written by WCCF Trustee, Dorothy Tecklenburg, was featured in the Autumn 2009 edition of the Legacy, the Foundation’s newsletter.

California University of Pennsylvania (Cal U) President, Dr. Angelo Armenti, spent his life in debt. In debt to his immigrant parents, who taught him the value of music and education. In debt to Sister Maria, who taught him to enjoy math, which led to his career as a physicist. Payback?  They deserved it. But it was too late, so instead of paying them back, he paid it forward by establishing scholarships in their names, which would allow the next generation a chance at an education.

He married a women with an identical outlook.  Barbara Armenti felt a similar debt to her coal‐mining family, so the Armentis also set up a scholarship in her parents’ name.

But it’s not donating money that makes them philanthropists.  “The word ‘philanthropy” means ‘love of humanity.’” he says.  “We teach our students the duties and responsibilities that come from being part of a group. They can give any of the three T’s: time, talent, or treasure.”

Washington attorney and WCCF Trustee Charles Keller, who nominated the Armenti’s as Philanthropists of the Year, says Dr. Armenti has “developed, promoted and supported a contagious atmosphere of philanthropy” on the Cal U campus.

Since the University is partially funded by the taxpayers, Dr. Armenti feels that, while the students can’t pay their benefactors back directly, they must find ways of paying it forward. He recently addressed 1500 incoming students, gave each an envelope, and asked them to place a dollar in it. The envelopes were collected, one name was drawn and that student received a $1500 scholarship.  The students saw how one life was affected by many small gifts.

Dr. Armenti’s greatest honor may be having his name on a tee‐shirt. One student created “Armenti’s Army” tee‐shirts, sold them on campus and donated the money to three charities.  “It proves they get it,” Dr. Armenti says. “I am so proud of them!”

Dr. Armenti is quick to dispel the stereotype of a philanthropist as a wealthy person who donates millions of dollars, preferring to focus on the three T’s, as does his wife, Barbara.

Barbara Armenti is a role model for giving time and talents. She chairs the Mon Valley United Way campaign, volunteers with the Heart Association, and raises funds for local organizations.

“She’s busier than I am!” her husband chuckles. “If you need to raise money, just call Barbara!”

“I love being involved,” she says. “It has afforded me the opportunity to meet wonderful people.”

They both feel humbled by this recognition.  “Barbara and I derive great satisfaction and pleasure to help the way we were helped.  We enjoy seeing young people achieve their goals and encourage them to pay it forward.”

“Dr. Armenti is inspiring a new generation to philanthropy,” says Keller. “He will leave a mark for generations to come.”  WCCF will establish the Dr. Angelo & Barbara Armenti / Cal U Scholarship Fund.

“We are honored to be among the wonderful people who have received this award in the past,” says Barbara Armenti. “I never imagined we would be in that company.”