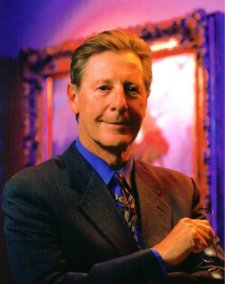 Noting his ʺ20/20 vision for giving,ʺ the WCCF honored E. Ronald Salvitti, M.D. as the 2001 Philanthropist of the Year, during the Foundationʹs annual banquet in November.  As a lasting tribute to, and in appreciation of Dr. Salvittiʹs tremendous philanthropy, the Salvitti Family Fund has been created at the Foundation.

Dr. Salvitti, the founder and medical director of the Southwestern Pennsylvania Eye Center, has a distinguished career in medicine that has spanned some 35 years.  A 1959 graduate of Washington & Jefferson College, Dr. Salvitti completed his medical degree in 1963 at Temple University School of Medicine and his internship at The Washington Hospital in 1964.

In 1970, Dr. Salvitti made the decision to change his focus from family practice to ophthalmology.  He completed his residency program at the University of Pittsburgh School of Medicine, serving as Chief Resident at the Eye & Ear Hospital from 1972 through 1973.  Dr. Salvittiʹs contributions in the field ophthalmology have been recognized by his peers and by professional organizations.

An active leader in our community, Dr. Salvitti has been a board member of several organizations including The Washington Hospital Foundation and the Temple University Medical Alumni Association.  He is a member of the Board of Trustees of Washington & Jefferson College and is founding member of the Malcolm Parcell Foundation Board of Directors.

In 1993, Dr. Salvitti was elected to the Pennsylvania Sports Hall of Fame for basketball.  He was honored by Washington & Jefferson College as a 1998 recipient of the Maurice C. Waltersdorf Award for Innovative Leadership.  In 1999, he was honored by the Italian Heritage Society of America for his contributions to medicine and was selected as Washington & Jefferson College’s Entrepreneur of the Year.

He established the Salvitti Family Foundation in 1994 for the purpose of supporting education and science projects along with local community charities.  Among the many local charities that have benefited are the Bentleyville Library, Brownson House, Citizens Library, LeMoyne Center, Washington County Food Bank, Washington City Mission, Washington Womenʹs Shelter, and The Watchful Shepherd.

Dr. Salvitti also established the E. Ronald Salvitti, M.D. Endowed Medical Scholarship Fund at Temple University.  The mission of this scholarship fund is to assist needy medical students whose homes originate in Washington County, and to give back to the school that helped him realize his own dreams.