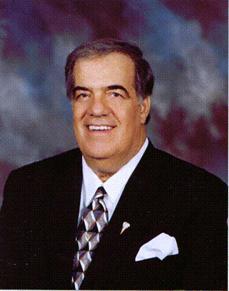 “Sweet Memories” was the theme of the comments offered by Manuel “Buns” Pihakis, as he, along with over 325 people joined with the Foundation to honor Frank Sarris as the Philanthropist of the Year on November 16th. The memories included stories of how Buns and Frank orchestrated pranks and practical jokes on each other over their 40 year friendship, including the time Frank arranged for a six foot tall candle for Buns to light in church ‐ a considerable task since Buns is barely five feet tall.

And of course there was the time that Buns arrived at the White House in his purple suit in a black, chauffeur‐driven limousine at the very ceremony in which Frank was to be honored by President George W. Bush as a finalist for the National Small Business Person of the Year and to which Frank was not able to get Buns invited.

Frank had a few memories of his own including the many times, as he was trying to perfect the recipe for Sarris chocolate, his wife Athena had to hold the flashlight as Frank buried his “mistakes” in their backyard, after dark of course so no one would see. Frank also remembers a few visits from the Liquor Control Board wishing to “see his operation” because he was purchasing so much sugar at the local A&P.

Frank spoke little about his philanthropy, choosing instead to acknowledge a greater gift that he had received, not given ‐ a life saving gift of a kidney from Buns’ son, George Pihakis. “That is philanthropy,” Frank said.

Buns’ response as to why he continues to spend time with Frank after all the years of practical jokes, “Hey, I’m just looking out for my son’s kidney.”

Frank Sarris has received numerous awards for his successful business enterprise.  In 2001, he was recognized as the Pennsylvania Small Business Person of the Year.  In the same year, he was a finalist for the National Small Business Person of the Year, receiving the award personally from President George W. Bush at the White House.  A Certificate of Special Recognition was presented to him from the United States Congress and he received a Citation from the PA House of Representatives.  Washington & Jefferson honored Mr. Sarris with its Entrepreneur of the Year award in 2002.  Additionally, Sarris Candies was recently recognized by the Pittsburgh Business Times as One of Pittsburgh’s Fastest Growing Companies.

When Mr. Sarris learned that he had been chosen by the Foundation he commented, “I have been honored with many awards in recent years and I am very appreciative of each award.  But to be considered an equal to this distinguished list of honorees is absolutely humbling to me.  This is a wonderful thing that the Foundation is doing.”