The following article, written by Michael Bradwell, was printed on the front page of the Observer Reporter on November 10, 2008. 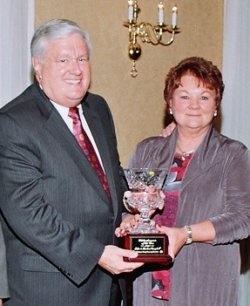 When John Campbell arrived in Washington in 1975 to go to work for Hood Insurance Agency, his boss, Henry Hood, took him around town for some introductions.  One of the first stops they made, Campbell recalled last week, was at the offices of the United Way of Washington County, where Hood gestured to Campbell and said, ʺWe have a new volunteer.” That introduction would be the beginning of 25 years of service to the local human services agency and one that would spark Campbellʹs interest in giving to an untold number of health and human services charities and projects over the years.

On Friday, Campbell and his wife of 43 years, Barbara, will receive the 2008 Philanthropists of the Year Award from the Washington County Community Foundation, commemorating the coupleʹs long‐time tradition of giving to Washington County charities. The banquet will be held at Southpointe Golf Club.

Campbell, 62, said his initial visit to the United Way all those years ago didnʹt create an epiphany about giving his time, expertise and money, but set in motion a more modest progression of realizing the importance of community involvement.  ʺIt wasnʹt as obvious as Mr. Hood leading me down to the United Way, but once you get going in the nonprofit world, itʹs easy to see what needs to be done,ʺ Campbell explained. ʺWeʹre just doing our part,ʺ he said.

Just a few years after the Campbells started their own insurance agency, Campbell Insurance Associates in 1989, Washington County Community Foundation was a fledgling organization looking for local people to lead it on its mission of making local philanthropy possible by offering charitable gifting opportunities to donors on an individual basis.

Campbell became one of the founding members of the Foundation, which today has more than 100 charitable funds with a combined value of more than $5 million. It has awarded more than $1.5 million to support quality of life issues as diverse as the arts and humanities, education, environment and animal welfare, health, human needs and religion.

ʺWe rolled up our sleeves and did it ourselves,ʺ Campbell said in describing how he and other founding members ran WCCF as an all‐volunteer organization until it was able to hire a full‐time director.

One of the things that appealed to him about WCCF was its ability to enable a donor to create an endowment to a cause that would ensure regular contributions long after the donor was gone.  ʺI really like the concept of endowment giving, and Barbara and I have been active in supporting that,ʺ he said.  ʺWe think very highly of the community foundation because of its endowment approach.ʺ

Attorney Charles Keller, who met Campbell when he represented him in a business matter, said he was impressed by Campbellʹs organizational skills and natural leadership abilities. He said those skills, combined with Campbellʹs generosity, made him a natural in working with service and charitable organizations like Rotary, United Way and WCCF.  ʺHe was a most generous person in giving of his time, leadership and his resources,ʺ said Keller, who also was a founding member of the community foundation.

Campbell also was one of the first people that Carlyn Belczyk met when she and her business partner Randy Guthrie moved their accounting firm to Washington and began working with nonprofit organizations around town.  ʺHe was always willing to give not only of his expertise, but also gave very generously and gave anonymously,ʺ Belczyk said. ʺThe money just showed up in organizations that sometimes came up short at the end of the year. It came from John.ʺ

Washington Hospital Chief Executive Officer Telford Thomas said Campbell has been a longtime board member of the hospital and its foundation, adding that he currently serves as a co‐chairman of its capital campaign.  ʺHeʹs always been supportive with his input, recommendations and certainly with his resources,ʺ Thomas said, adding that the Campbells ʺhave been very warm in their giving to the hospital.ʺ

Campbell said he couldnʹt have become involved in philanthropic projects if it wasnʹt for his wifeʹs support, adding that he and Barbara give to some projects individually and others jointly.  ʺI need the support of my wife and family, which has allowed us to do things that we might not have been able to do,ʺ Campbell said, adding that they have passed along their spirit of giving to their children, Mark and Lori.  ʺItʹs been a joint effort,ʺ said Barbara, who serves as chief financial officer at the insurance agency, adding that sheʹs comfortable providing the support system and being behind the scenes while her husband is the public figure who represents both of their charitable efforts.  ʺHe likes to be seen,ʺ she said.

But Campbell said he also enjoys giving in not‐so‐visible ways, explaining that he also believes in practicing random acts of kindness, ʺgiving in spur‐of‐the‐moment, non‐repetitive ways that have meaning only to be really seen by the recipient.  ʺActually, giving makes me feel good,ʺ he said.

The following article, written by WCCF Trustee, Dorothy Tecklenburg, was featured in the Autumn/Winter 2008 edition of the Legacy, the Foundation’s newsletter.

Generations of the Campbell family, as well as many friends and business associates, attended the November 14 banquet at the Southpointe Golf Club to share warm wishes with John and Barbara Campbell, the 2008 Philanthropists of the Year.

Even before John and Barbara Campbell were married in 1965, they shared many things ‐ including attending the same middle school and graduating from the same high school in Michigan.  Their shared desire to further business connections in the insurance industry brought the young couple, and son, Mark, to Cincinnati and then to McMurray, PA, after the birth of their daughter, Lori.

And it was a shared commitment to family that resulted in the couple being actively involved with their children’s many and varied activities including sports, school, and community.  In early 1975 as President of a local insurance agency, John began volunteering for the United Way, Rotary Club and various other community causes.

Eventually, the couple’s shared vision to establish their own family business resulted in the creation of Campbell Insurance Associates in Washington in 1989.  Since its inception, John has served as the President, and Barbara as the Chief Financial Officer of the company.

With their children grown and their own company created, the couple shared a wish to become more involved in the community and it was decided that Barbara would provide behind the scenes support to John as he expanded his involvement with various business, civic and charitable groups.

One of the first groups John became involved with was the Jaycees.  Quickly, he became known as a volunteer who could make things happen and was asked to join many organizations including the United Way of Washington County.  At United Way he held many positions and eventually was elected to serve as the Chairman of the Board.  Through his United Way activity, he learned of the good work of many health and human service organizations which he and Barbara had been supporting on an annual basis.

“As we saw the good that our annual gifts were doing, Barbara and I wanted to ensure that our giving would continue forever through endowed gifts,” remembered John.  “In other areas, community foundations had been created to accept endowed gifts and I was very excited to join other community leaders in initiating the Washington County Community Foundation in late 1995.  Since then, Barbara and I have tried to ensure that our giving to favored charities will continue forever through endowed funds at the Community Foundation.”

John and Barbara’s shared commitment to family has been renewed with their grandchildren.

“For us, philanthropy is a family activity and we are pleased to know that our children are actively seeking ways to educate our grandchildren about the importance of giving,” said John.  “It is very important to us that the charitable spirit will continue in future generations.”