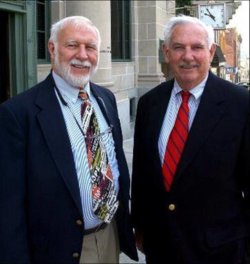 John and Bill Northrop have given generously of their financial resources as well as their time to numerous charitable organizations. Additionally, under their leadership, the Observer Publishing Company has supported, in significant ways, a multitude of worthy community causes.

Until their retirement in June of this year, John and Bill were co‐owners of the Observer Reporter, which celebrated 100 years of family ownership in July of this year.  Both are graduates of Washington and Lee University and past Presidents of the Pennsylvania Newspapers Association (formerly known as Pennsylvania Newspaper Publishers Association).

John received the NAACP Human Rights Award in 1968, the Washington Jaycees Distinguished Service Award and Philanthropist of the Year by the National Society of Fundraising Professionals in Pittsburgh.  He also received a honorary doctorate from W&J for community service in 1999, has been an active member of the Washington Rotary Club since 1960, and is a Founding Trustee of the Washington County Community Foundation.  John resides with his wife, Rose McCutchan Northrop, in Washington.

Bill, a leading advocate for open public records under Pennsylvania’s Sunshine Law, received the PNA Ben Franklin Award in 2000 and was the first recipient of PNA’s G. Richard Dew Award for outstanding contributions to journalism.  He also was the first recipient of the League of Women Voters Service Award in 1992, which he received again in 1999.  Bill resides with his wife, Sally Davis Northrop, in Washington and Pinellas County, FL.

To honor their dedication to Washington County, the WCCF has created the Northrop Family Fund, a donor‐advised fund from which grants will be recommended by the Northrops.