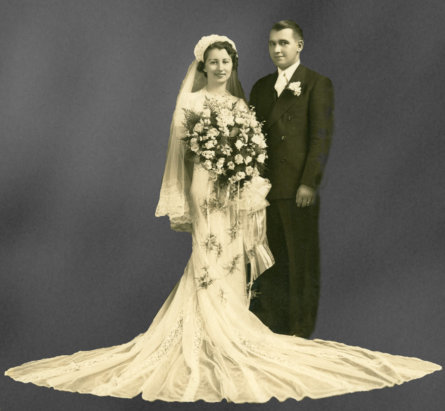 It’s the early 1960’s. Like so many of his fellow steelworkers at the Donora mill, John Choratch saw his way of life ending. The world had changed, and the steel mills in the Mon Valley were on life support.  John and his wife Sophie, lifelong Donora residents, were approaching their fifties.  John’s job in the mill was all they had ever known; when US Steel shuttered its plant, John was too young to retire. They had to find another way to support themselves.

They bought John’s Flower Shop in Donora. It was a tremendous risk:- neither of them knew the first thing about flowers, and there were two other flower shops in town, all struggling to find customers at a time when so many of their friends and neighbors couldn’t afford luxuries.

Real Life is what happens despite all of our careful planning. Shortly after buying the shop, John passed away from a heart attack.  Sophie became the sole owner of a business that represented her future. She went to Hixson School of Floral Design to learn floral arranging.

“Sophie knew nothing about the flower business,” said Richard Harrison, a floral designer and native of Donora.  “She didn’t care much for the creative side of the business.  So she hired me and I worked for her for 29 years.”

Sophie became an astute and successful business woman the old-fashioned way: by working hard and putting in long hours.  After a full day selling flowers, she retired to her apartment above the store to do the bookkeeping.

“She was great with people and handled all the sales, both in person and over the phone,” said Richard.  “Sophie knew everyone in Donora and everyone knew her.  She opened accounts at the three local banks so that when they needed flowers, they would call her. No one was surprised when her shop outlasted the other two flower shops in town.”

At age 86, Sophie sold the store and retired; six months later she died.

“When she gave up the store, she gave up living,” said Richard.  “The flower shop was her life.”

Sophie’s will showed what local philanthropy is all about: $25,000 went to the local Meals on Wheels program and another $25,000 to the Donora Public Library.

“Sophie knew many of the people in Donora who relied on those meals and she wanted to help them,” said Richard.  “She also believed in education and viewed the library as a form of education.”

Sophie designated a significant portion of her estate as a perpetual fund to provide scholarships to local high school students, and the Washington County Community Foundation was asked to administer it.  It was one of the WCCF’s earliest estate transfers. In response to 9/11, she wanted her scholarships to help children of first responders.

The WCCF received $720,000 from Sophie’s estate, making the John and Sophie Choratch Scholarship Fund one of the Foundation’s largest scholarship funds.  Today the fund is valued at more than $900,000 and has provided $175,000 in scholarships to 70 Washington County children of first responders.

“That is fantastic!” exclaimed Richard.  “Sophie would be very pleased to learn that so many children are being helped.”

More than 14 years after Sophie’s death, her generosity continues to make a difference through the contributions of scholarship recipients.  Every student has a story, but Hunter’s is special.

Chartiers-Houston High School graduate Hunter Saieva wants to help police officers who have been wounded in the line of duty.  She said, “My father was injured by a bullet and God gave him a second chance at life. Since then, I knew that I couldn't follow in his footsteps and worry my family. At Penn State, I am a Psychology major in hopes that I will help police officers talk and cope with situations they've been through.”

This is the first time the Philanthropist of the Year Award has been given posthumously.  “This award recognizes individuals who have made their mark on this community through philanthropy,” remarked Betsie Trew, WCCF President & CEO.  “There are many who made their philanthropic mark long before this award was created in 1999, or even long before the WCCF began operating in 1995.  These individuals, like John and Sophie Choratch, deserve recognition.  We look forward to future opportunities to recognize others who are no longer with us, but whose generosity continues to improve the quality of life in Washington County.”

Sophie’s bequests have helped her community so many years after her passing, and will continue to make a difference to students and their families for years in the future.

“There surely is a star shining over her grave at the cemetery,” said Richard.