The following article, written by Michael Bradwell, was published in the Observer Reporter on Nov 15, 2004. 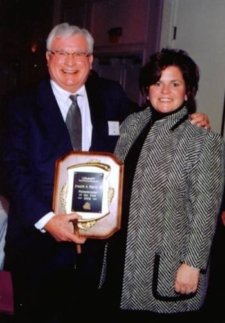 On any given day, Joe Hardy arrives at his office at 84 Lumber Co. to find a stack of letters from groups and individuals asking him for charitable donations. The stacks are so big that Hardy acknowledges he has a staff of three people working full time to determine which requests are eligible for his consideration.

As the man who started 84 Lumber and built it into one of the country’s largest privately held companies, Hardy made his fortune focusing on providing building materials at “one price for all,” regardless of a contractor’s size. The concept, which was a novel idea in the booming home construction industry of the 1950s, helped Hardy build his fledgling company into a national chain of stores.

Now 81, with his family taken care of financially, he says he’s using his money to help other people better themselves economically.  “My philosophy is to die broke,” said Hardy, who will receive the 2004 Philanthropist of the Year award from the Washington County Community Foundation Friday at a banquet at Hilton Garden Inn in Southpointe, Cecil Township.

If someone is fortunate enough “to make a few bucks,” Hardy said, then he or she should be thinking about giving some of it back in their lifetime.  “Nobody’s immortal,” he said. “You can’t hire a Brinks truck to follow the hearse around.”

But for Hardy, the goal of going for broke through philanthropy has a different meaning than it does for most people. In fact, he could qualify for the title of philanthropist‐activist.  “I got a letter the other day that said, ‘Send me $1.5 million, and my life will be perfect,’” Hardy said. “If I contributed to those kinds of requests, I’d be broke in one day. You have to be discriminating with what you give.”

Besides, writing a check to a charitable concern usually isn’t the final act for Hardy, but merely the beginning of a process. If he’s going to give to something, he said, he expects to be involved with the endeavor. He likes the idea of partnerships, especially those that involve both the public and private sectors. And those who receive help through his contributions probably will find themselves doing a lot of the heavy lifting – either mentally, physically or both.

“It’s not giving money away,” Hardy says of his contributions. “Anything I give away of any size, I like to be involved in it.

“It’s a trust for me,” Hardy continued. “I have it for a short time; therefore, I should work as hard at (the giving) as I did to make the money.”

One of his favorite projects has been Washington & Jefferson College’s Entrepreneurial Studies Center, which he provided money to start in 1986.  The center provides students in the program with courses and practical work with people in the Washington business community that prepare them to start their own businesses.

Dr. Andrew Rembert, W&J’s interim president, said Hardy’s decision to start the entrepreneurial studies program at the college “had a tremendous impact then, and it’s gone from good to better to best. It’s not just a business program like many institutions have.”  Rembert noted that the impact goes well beyond the monetary contributions Hardy has made to the center, and the scholarships he provides to four students in each class. “He also takes a hands‐on approach,” Rembert said, “visiting the introductory class each semester. This fall, he took students on a tour of the Nemacolin Woodlands in Farmington to show them first‐hand the results of his entrepreneurial efforts in building a world‐class resort.“

Hardy also sponsors the college’s annual Entrepreneur of the Year award banquet that honors successful entrepreneurs who have either graduated from W&J or whose work has had an economic impact on the region.

Tim Murphy, who has been the center’s director for the past three years, said Hardy’s enthusiasm belies his age.  “What’s so amazing about him is that he’s got the energy of a teenager,” Murphy said, adding that Hardy brings his real‐life business experiences to the students and shares them in a down‐to‐earth way.    “Joe doesn’t pontificate,” Murphy said.  “He tells a story about something that happened to him in business over the past 50 years to answer their questions.”

Hardy also is a regular donor of building materials to Habitat For Humanity projects in the region, and has even helped former President Jimmy Carter work on a Habitat house. What appeals to him about Habitat projects, Hardy said, is the “sweat equity” requirement that has the future owners of a home putting their labor into the project with other volunteers.  “If I see a common man or woman excel and if I can help them with an environment to succeed, I get a wonderful feeling out of it,” he said.

He also is contributing the lion’s share of money for the renovation of Uniontown’s business district, rehabbing storefronts by giving grants to business owners who have solid plans to renovate.  He also purchased 10 downtown properties that will be renovated or torn down for parks.

When asked what message he would give to others considering philanthropic work, Hardy said he hopes to encourage more entrepreneurs like himself to become involved in giving.  When he was starting the lumber company with his brothers in the 1950s, Hardy said, the Pittsburgh area’s philanthropic efforts came primarily from the big corporations like Gulf Oil and Koppers Co. that were headquartered there.

“Times have changed,” Hardy said. “The corporate thing has almost disappeared. Now we’re looking at creating entrepreneurs. Entrepreneurs, as they get a little age on them, they have a tendency to give back,” he said. “An entrepreneur wants to see something get done.”

“He’s really ahead of the curve,” Murphy said. “He knows the economy has gone from manufacturing to service, that business has gone from big to small. I wonder how many people in philanthropy have noticed the same thing?”