The following article, written by Michael Bradwell, was published in the Observer Reporter on Nov 21, 2005. 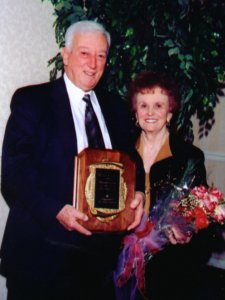 Like most people who have spent much of their lives contributing to something they see as vital, the Bassis admit to being somewhat embarrassed about being put into the spotlight for their work.

ʺMaybe we just got the award for being decent citizens, and participating in the community to the extent of our ability to do so,ʺ said Mel. They donʹt have a set plan for giving, preferring to instead donate ʺwhere we feel it will have the most mpact,ʺ such as helping young people around the area.

Mel graduated from Charleroi High School, where he played football, and enlisted in the U.S. Navy, serving in the Pacific Theater during World War II. Following the war, he enrolled at Washington & Jefferson College, where he played baseball, then earned a law degree from the University of Pittsburgh.

But in addition to his work at the law firm, Mel also developed another career as a banker.  ʺIʹve been fortunate enough to have been successful in both fields,ʺ he said. He is Chairman of the Board of Charleroi Federal Savings Bank, which he took over in 1963 when it was a fledgling, $18 million savings and loan. Today, it has $370 million in assets. Mel also served as Washington County commissioner from 1995 to 1996.

In 1999, he was inducted into the Mon Valley Sports Hall of Fame in recognition of his years as an athlete and the 18 years he spent as an official with the Pennsylvania Interscholastic Athletic Association, officiating football for area high schools and for colleges in the Eastern Intercollegiate Athletic Conference.

And much of the Bassisʹ giving took place around the athletic fields of Western Pennsylvania.  Years ago, when he managed a Colt League baseball team, Mel said he liked to get to know the players and find out what their goals were when they graduated from high school. One of the boys was a straight‐A student who wanted to be an engineer.  ʺThe longer I talked to him, the more evident it became that his father wasnʹt going to pay for him to go to an engineering school like Carnegie Mellon,ʺ Bassi said. He helped the boy financially to reach his dream. Today, the man is a vice president of a large national company, and Bassi said he remains in touch with him.  ʺI hope heʹs following the same kind of mentorship that I provided,ʺ he said.

The Bassis, who were married in 1949, said they almost always agree on their charitable contributions for education. Both he and Lillian, a former teacher, acknowledged that their criteria for helping people who want to further their education gives personality and character precedence over grade‐point averages.  ʺWe donʹt give according to class rank,ʺ Mel said. ʺThe objective of our giving is on the basis of need and the promise of a successful career.ʺ

Their son, Keith Bassi, who recalled accompanying his father on trips to officiate Friday night high school games and Saturday college games, said his fatherʹs story about helping the young ballplayer ʺis just the tip of the iceberg.ʺ  Noting that the Colt team his father coached ʺwas a superior team that reached the playoffs,ʺ Keith recalled that his father purchased plane tickets to enable the entire team to go to a play‐off game in South Carolina. ʺHe made certain every member got on that plane,ʺ Keith said, adding that his father has helped countless student‐athletes pay for their college tuitions over the years.

Keith said his father knew all of the high school coaches through his officiating assignments, and got to know many athletes he befriended before and after the games, learning what they wanted to do with their lives and determining how he could help them.

Lillian, who prefers to let her husband do most of the talking about their philanthropy, has spent a lifetime dedicated to education. A graduate of California University of Pennsylvania, she began her teaching career in the California School District in 1948. In 1954, she retired to raise the coupleʹs four sons, Keith, Bradley, Neil and Mitchell, who are all successful in their professions. But she couldnʹt resist the call of the classroom and taught several more years in the Monongahela system, where she received the Teacher of the Year Award prior to her permanent retirement in 1964.

Keith said he discovered firsthand as a youth that his mother took her profession seriously when his regular fifth‐grade teacher took an extended leave of absence.  ʺOf all the substitutes in the school district, they selected my mother,ʺ Bassi recalled last week. ʺShe elevated the conduct of the classroom just by her presence.ʺ  That presence and her insistence on discipline nearly caused him to call his mother ʺMrs. Bassiʺ when they were away from the classroom, said Keith, who recalls the semester as one of the best educational experiences of his life.

Lillian continues to be actively involved in education through Cal U., where she recently was honored with the schoolʹs first Core Values Award for integrity, civility and responsibility, which was named in her honor.

Frank Mascara, a former Congressman and County Commissioner who has been a friend of the Bassis for more than 50 years, said both are quiet people who donʹt seek the spotlight.  Mel has always been involved in the community, he added, not only financially, but also by giving of his time.  ʺHeʹs not out there looking for any accolades,ʺ Mascara said.  ʺHe has a reputation for wanting to give and give quietly.ʺ

While Mel and Lillian said they donʹt see themselves as philanthropists in the way of a John Rockefeller or an Andrew Carnegie, they both believe that everyone can become a giver to a favorite cause.  ʺI donʹt think itʹs the amount you give, but the love you have for helping somebody,ʺ Mel said.  ʺWhen you get old enough and start looking around at society, you sort of make judgments about how your money could be used. And always, it should be given without expectation of reward for having given it.ʺ

ʺIt has to come from the heart,ʺ Lillian said