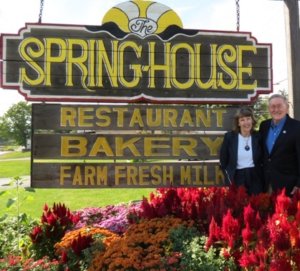 You can stop by the SpringHouse on Route 136 and get milk. You can get home-cooked food. You can get bread. But you can also find something more. Friendship. Acceptance. Encouragement. You can tap into a little of the love that Sam and Beverly Minor spread out in every direction, every moment of their lives. They can’t help it. It’s who they are.

It’s why the WCCF has named them Philanthropists of the Year.

“At first, we weren’t sure if we should accept,” said Sam, “but I looked up the definition of ‘philanthropist’ and it said ‘Love of Humanity.’ So I guess we qualify!”

When a customer walks in the door, Bev wants to do more than sell them milk.

“We educate them about agriculture and create beauty with wonderful food and our country setting. We give them more than they expect. We want them to know they are the most important thing right now.”

Sam and Bev were both raised on farms, and after graduating from Penn State and working in a corporate setting, they wanted a business that would better the community and also be a family affair.

Knowing location was vital to any business, before buying acreage on 136, they sat and counted how many cars passed in a day. Despite their families saying, “You’re crazy," they founded the SpringHouse in 1975, painting “Dreams really do come true” on the floor. It’s still there, and so are they, living the dream, that meant years of hard work and sacrifice, at first putting every dollar back into the business. Now, nearly 40 years later, the business is thriving and three of their children are involved: Marcia manages the store, Sam runs the dairy farm, and Jill oversees catering. Two other children live out of state, but whenever they visit, they jump right back into the action. 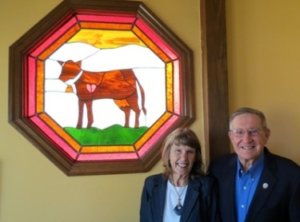 The Minors don’t just have five kids, it’s closer to 500, and Sam is proud of every one of them. He estimates that more than 500 teenagers found their first jobs at the SpringHouse, where they learned the virtues of hard work, commitment to a job, and how to treat people with respect. “They learned to value work and what comes from it,” he said.

“Part of what they learn is ‘Go, go, go. . .what’s next?’” Bev laughs. “But we also teach them what it takes to give our customers a memorable experience: sparkle, hustle, and enthusiasm."

The Minors gave to the community, and the community gave back. Last year, their daughter, Marcia, experienced kidney failure and was awaiting a transplant.

“The outpouring of support from the community was overwhelming,” said Bev. Women set up stands in the store where customers could write their encouragement. They filled three notebooks with well wishes.

“It was beautiful,” Bev remembers. “It brings out character. We all grew through that.”

Marcia had a successful transplant and is back working at the job she loves.

It started with a vision, and the Minors say, when you have a vision, you have to live it, eat it, drink it. Also, fund it. They have been generous with their favorite causes, especially their alma mater, Penn State, and closer to home, the Washington Health System and Grace United Methodist Church. The WCCF fund set up in their name will recognize and support entrepreneurship.

“Everyone needs to give back. All the little things add up,” said Bev. “We’ve truly been blessed by this community.”

Additional Information About the Minors

Sam & Bev Minor were named Master Farmers in 1998 by Pennsylvania State University for “high achievement in farming and community service.” Sam was also named an Alumni Fellow at PSU’s College of Agriculture in 1989. Over the years he was involved with the PA Farmers Assoc., PA Holstein Assoc., Penn State Cooperative Association, and was a PSU delegate to the National Council on Agricultural Research, Extension and Teaching. Locally, he was a member of the Washington Hospital (now Washington Health System) Board and helped in the hospital’s recent capital campaign. He was a former school board member of Canon-McMillan School District and a former member of the North Strabane Township Recreation Committee. He also was a member of the administrative board and a lay speaker at the Grace United Methodist Church. Bev was recognized in 2006 as one of PA’s Best 50 Women in Business. She served on the PA Dairy Stakeholders Board and chaired the PA Milk Marketing Board. She has been active in the state Dairy Princess Program and the PA Dairy Promotion Program Board. The Minors were very involved for many years with 4-H and the Washington County Agricultural Fair. Their supported community charities include: Washington Health System, Grace United Methodist Church, the Bradford House, Domestic Violence Services of SWPA, Washington City Mission, Washington County Humane Society, Washington County Food Bank, and WCCF.