The following article, written by Michael Bradwell, was printed on the front page of the Observer Reporter on November 15, 2010. 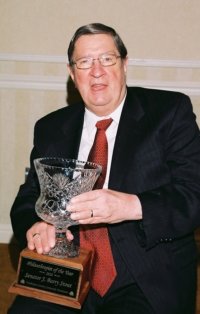 Sitting in his soon‐to‐be‐vacated office along Route 519, state Sen. Barry Stout recalls one of his early successful forays into community improvement.  It was 1960, and Stout, who was then in his early 20s, was named secretary of the Bentleyville Boosters Club. The group had decided to enter a national contest to sell Kraft Caramels to raise money for a park in town.  ʺWe thought we could win maybe $1,000ʺ for the park campaign, Stout recalled.  The group received support from other small communities nearby, he said, and ended up selling 55,000 bags of caramels, netting $25,000 ‐ a significant amount for the time ‐ and leading the country in the sales contest.

ʺNobody could believe this little town of Bentleyville could lead the nation selling Kraft Caramels,ʺ  Stout said, noting that ʺCaramel Parkʺ recently celebrated its 50th anniversary.

He said the successful fundraising event was an early lesson in something that served him well in a political life in getting other legislatorsʹ support to help him create the Mon Valley Expressway and Southern Beltway projects.  ʺI learned that by working together, you can get something done,ʺ said Stout, 74, who will retire as state senator at the end of the month after a 40‐year career in Harrisburg.

He also said his private giving to help others, particularly in the area of education, is aimed not just at improving the lot of individual people, but by extension, helping to better the communities in which they live. For those efforts, heʹll receive the 2010 Philanthropist of the Year Award from the Washington County Community Foundation.

Stoutʹs greatest political legacy will be the Mon Valley Expressway, and during an hour-long interview, he referred to it several times, pointing to a map on an easel that sits next to his desk.  ʺI didnʹt build this road for Barry Stout; I built it for our grandchildren,ʺ he said.  ʺWe need future leaders for government, for volunteer firefighters and Girl Scout leaders. Itʹs not just jobs alone; itʹs for the communities along (the highway) to support young people.ʺ

While the project represents the apex of Stoutʹs public career, his private life as a strong supporter of local service and fraternal organizations and education are not as well known, but those contributions also seek in various ways to build local communities.

ʺBoth my parents were college graduates and knew education was important,ʺ said Stout, who graduated from Washington & Jefferson College in 1964 with a degree in economics. His father, William Stout Sr., founded Atlas Railroad Construction in the early 1950s, an Eighty Four‐based company that provides engineering, construction and maintenance for the rail industry.   Stout said he took a cue from his fatherʹs habit of charitable giving to numerous community entities such as the local fire department, library and school PTAs.

As part of his award, WCCF will establish the J. Barry Stout Charitable Fund, and Stout said he and his wife, Lenore, a graduate of Washington Hospitalʹs School of Nursing, want the fund to be dedicated to helping area young people further their educations.   While Stout said he wants to emphasize post‐high school education, itʹs not just college, but everything from learning a trade to training for work in the burgeoning Marcellus Shale play.

To Stout, the formula is a simple, but challenging one: Education and training beget more job opportunities, which, in turn, strengthen the quality of life in countless local communities.

ʺI deal with a lot of people who have problems in their lives,ʺ Stout said, noting that he frequently talks with constituents who are dealing with an illness, an accident or experiencing the consequences of a bad decision theyʹve made.

In the four decades since he went to Harrisburg, he said, ʺthe annual budget for the state Department of Corrections has gone from a few hundred million to more than $2 billion. As we speak, there are more than 53,000 people incarcerated in the state prison system. We need to educate people, so they donʹt make bad decisions.ʺ

Stout has maintained close ties with his college alma mater, as have other family members who are W&J alumni. Over the years, he has supported a variety of initiatives including capital support, student scholarships and awards, the annual fund and other areas of need. He is a lifetime member of the John McMillan Society, a distinction given to the collegeʹs benefactors who have achieved a lifetime leadership giving level.

ʺThe Stout family has a special relationship to the education department of W&J,ʺ said President Tori Haring‐Smith. She said the familyʹs donations to the department reflect the strong emphasis on education that was instilled by their parents.

Stout also was able to donate a variety of Atlas Railroadʹs resources to local rail‐related projects over the years.  Max Morgan, a WCCF trustee and long‐time friend of Stout, said that while the senatorʹs emphasis as chairman of the Senate Transportation Committee was improving roads and bridges here, he also gave money of his own for local transportation‐related projects.   Morgan, who retired two years ago as executive director of the Washington County Council on Economic Development, recalled that when the council was restoring the former B&O station on South Main Street in Washington, Stout paid for a rail ʺbumperʺ behind the station to enable the parking of railcars at the site.   ʺHe put the rail siding in and he sent a crew from Atlas Railroad to do the work,ʺ Morgan recalled.

Stoutʹs interest in personally helping local rail-related projects dates to the 1950s, when as a teenager he helped Atlas Railroad install donated track for the fledgling Pennsylvania Trolley Museum in Arden.

Executive Director Scott Becker said that over the years, Stout and his family have contributed both materials and labor as the museum expanded.   ʺTo have a donation of track materials and labor is not a small thing,ʺ Becker said, noting that the free labor alone ʺrepresents hundreds of volunteer hours.ʺ He said Stout and his brothers also donated a former Union Railroad motor car that the museum uses when it repairs track. Theyʹve also provided other track installation and repair equipment to help the museum complete a number of tasks, Becker said.  ʺTo have someone who has this kind of specialized equipment really helps us out,ʺ he said.

Stout is a steady contributor to his churchʹs various community outreach programs, which range from winter coat drives to Thanksgiving meals to family emergencies, said the Rev. Andy Scott of First Presbyterian Church of Bentleyville.   ʺHe has always been very generous in a very quiet way in supporting the missions of the church,ʺ Scott said.

When asked how he would advise someone whoʹs thinking about becoming a philanthropist, Stout said he would tell him or her to take an inventory of the local schools and other institutions that have helped make a difference in his or her life and give something back.   ʺI would advise them to consider the various things that have affected their lives. We want to help children to get a better education after high school, whether they want to be an electrician, a mechanic or a schoolteacher.  ʺI would also tell them to not just learn how to make a living, but to be happy with what you do.ʺ

The following article, written by WCCF Trustee, Dorothy Tecklenburg, was featured in the Winter 2010 edition of the Legacy, the Foundation’s newsletter.

When Barry Stout looks at a highway, he doesn’t see a stretch of concrete. He sees families.  He sees a tool for allowing adult children to stay in Washington County where they can find good jobs.  He sees grandparents who don’t have to travel to other states to visit their grandchildren.  And he sees senior citizens who, if their money runs out, will have sons and daughters in the area who can care for them. The community builds the road, then the road builds the community.

When Barry Stout looked at 598 green acres in Canonsburg, he didn’t see grass and trees. He saw a way to help grow our community and add jobs. The result was Southpointe, and twenty years, six thousand jobs and $1 billion in private investment later, the end isn’t in sight.

When Barry Stout looks at education, he doesn’t see buildings and textbooks.  He sees young people learning to make good life decisions, to become responsible, contributing members of our families and our communities.  He sees our future.

The New Oxford Dictionary says a philanthropist is “a person who seeks to promote the welfare of others,” ten words that describe and define Barry Stout.

What was the driving force behind forty years of public service?  “I help people.”  But he knows he couldn’t do it alone.  “God gives each of us talents,” he admits. ”Mine is working with other people to get things done.”

He grew up understanding how local politics affects people’s lives. Pennsylvania Congressman Dr. Thomas Morgan, a family friend, often stopped by the Stout home to enjoy political conversation and some of Mrs. Stout’s home‐cooked food. When Austin Murphy’s Pennsylvania House seat became available in 1970, Dr. Morgan encouraged young Barry to run.  Stout circulated petitions, gathered the signatures, and then received a dinner invitation from the County Commissioners.  He went, convinced he was getting their endorsement.  Their message?  “Get out of the race.  We don’t want you.  We have someone else in mind.”  He didn’t listen, worked hard, and despite overwhelming odds, he won. The political establishment then tried to punish his presumption and split his district. He won again, and from then on, “They left me alone.”

For forty years, Stout was in the business of helping people. The walls of his office bear witness to the remarkable breadth of his reach, with awards from local libraries, volunteer fire departments, the Trolley Museum, the Bar Association, a youth baseball association and dozens of other diverse groups.

His greatest political legacy is probably the Mon Valley Expressway.  He speaks of it like a favored child that he and so many people brought to fruition. “Cutting the ribbon was a special moment.  So many people worked together at all levels. I’ve been blessed with the opportunity few people get to do, to do something to help other people, and to build communities.”

Not as well known as his public persona, there is a private Barry Stout, a tireless worker for many local service and fraternal organizations, and a generous supporter of education, especially his alma mater, Washington and Jefferson College.

“Both my parents were college graduates and knew education was important,” he says.  “But as the economy changed and jobs went elsewhere, I saw that my classmates did not have the opportunities I had. We need young people to remain in Washington County and become leaders. My satisfaction comes from how we benefit the people of the future.  We can look back and see they got an education and other opportunities.”

It is difficult to get Barry Stout to talk about himself.  Instead, he credits his staff, many of whom have been with him for twenty‐five years or more, and his wife, Lenore, who raised their six children, always being there when he was away at thousands of meetings and during hundreds of nights he was away from home.

“I am from a good, loving, supportive family.  I am blessed.”  When talking about the legacy he will leave, he tears up, and apologizes for it.  “Sorry,” he says, for the first time looking away. “I’m just so thankful I had so many opportunities.”

He is honored to be the WCCF Philanthropist of the Year, and sees philanthropy as an integral part of life.  “Use what you’re given, then leave something for society. Build future generations with economic opportunities.”

Looking back on forty years, he sums it up: “My key satisfaction was working with people to get things done.”