Philanthropist, business leader, family man, and Washington County native ‐ Wilfred R. “Pete” Cameron was a remarkable man. He was mourned by many in the community in October of 1999. Just before his passing, the Washington County Community Foundation (WCCF) selected Pete as its first annual recipient of the Philanthropist of the Year award. The award was presented to the Cameron family posthumously at a WCCF‐sponsored Pittsburgh Symphony Orchestra concert at Trinity High School. 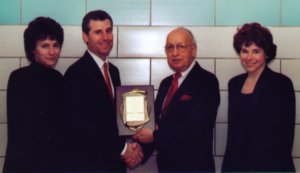 Pete was the President of Cameron Coca‐Cola, a multi‐generation family business in Washington, from 1971 until shortly before his death in 1999.

Pete was born into the Coca‐Cola business on February 22, 1925, the son of Wilfred Peter Cameron Sr. and Genevieve Riley Cameron. After graduating from East Washington High School in 1942, he served for two years in the U.S. Army Air Corps as a flight engineer. Pete graduated in 1949 from Dennison University, where he studied Business Management and Economics.

Racehorses, according to his widow, Nan, were one of Pete’s passions. Pete was so passionate that he built a third‐mile training track on the Cameron family property. He was experienced in breeding, training, and driving horses and frequented The Meadows to watch them compete.

Friends of Pete remember his warm personality. Jack Piatt Sr., a fellow horse owner and long‐time friend of the Camerons told the Observer Reporter, “We’re really going to miss him. Pete was always such a gentleman. He was a good friend.”

Perhaps his name is most known for an impressive donation he made several months before his death. In the summer of 1999 he and his wife made a record‐breaking contribution to The Washington Hospital‐ $5 million. The donation was used for the construction of the Wilfred R. Cameron Wellness Center, a center of the Hospital.

In addition to receiving the Philanthropist of the Year Award, each year’s recipient receives a fund named in his or her honor. Created in Pete’s honor was the Diabetes Education Fund, which supported diabetes education at the Wilfred R. Cameron Wellness Center of the Washington Hospital.