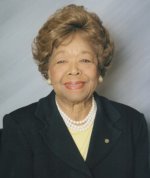 Gwen Simmons has led a life characterized by a commitment to service, and the long list of her activities and achievements is much more than impressive — it’s remarkable. As she is recognized for her past service as a Washington County Community Foundation Trustee (2006 – 2015) where she wholeheartedly shared her time, talent, and treasures to support the Foundation and its mission, Simmons traces her original desire to help others back to her parents.

Her minister father and her mother were both extremely active in their community.  Her mother served as President of the PTA and was involved with groups including the League of Women Voters. Her parents not only set a personal example of service and commitment, but did so “as a joy, not a duty.” From an early age they also taught Simmons, her three sisters, and her brother that, “we were blessed and had a responsibility to make life better or more pleasant for others around us.” Simmons also cites her teachers as a great influence, including her college sociology professor. He stressed that, “Each person could make a difference in the lives of others. That tied in with my parents’ teachings.” It was a valuable lesson that has inspired her actions and helped to inform her decisions throughout her life.

Simmons earned a bachelor’s degree and a master’s degree in economics and sociology, taught economics and sociology at Allen University and later at South Carolina State University, and raised two daughters and a son with her husband, Paul, a federal judge.  Her husband, who “worked hard day and night all his life,” encouraged Simmons to pursue service activities to “make up for both of us,” because he was too busy to do so. She and her husband instilled the same values and devotion to service they grew up with in their children, and all three participate in volunteer work.

Over the years, Simmons worked with, and often led, charitable and philanthropic organizations across the county and in her own community of Monongahela.  These included the Southwestern Pennsylvania Easter Seal Society, Mon Valley and Washington YMCA, the Mon Valley United Way, Monongahela Area Revitalization Initiative, Washington County Hospital Authority, Southwestern Pennsylvania Human Services, and the Board of Trustees of California University of Pennsylvania.  She also served as the President of the Washington County Historical Society, is a member of the NAACP, and is a member of the WCCF Women of Philanthropy Giving Circle. And the list goes on.

Simmons is quick to point out that she could not have done so much without her family’s support, and she characteristically notes, “I think not so much of what I have given, but what I have received.  That has been most important.”

Asked which of her many activities has had the greatest significance to her, she responds, “The things I received the greatest benefit from personally were anything involving working with young people and their development.

“The thing about volunteer work is that you are the recipient of so much from other people. They inspire you, you listen and learn from others, you learn to work with other people, and you learn to see that people working together can make a difference.”

And many years later, her parents’ early teachings and strong example are never far from her mind.  If she sees a situation she views critically or deems to be a bad one, “It always comes back to me, ‘What are you doing about it?’ It’s easy to criticize, but it’s more important to pitch in and try to make things better.”