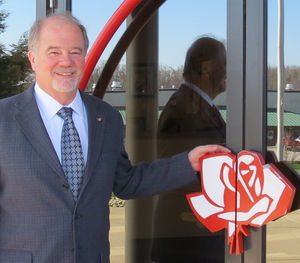 Molding, shaping, finding custom solutions – that’s Ken Donahue’s business. But those specialized skills honed while leading a plastics company also have played a role in guiding the growth of the Community Foundation.

Nearly 12 years ago, Founding Trustee and Former Board Chairman Charles Keller helped to identify Ken as a “promising prospect” for the WCCF Board of Trustees. Now, Ken is being recognized with the Richard L. White Excellence Award for Board Service for his extraordinary commitment to the Community Foundation.

A native of Chicago, Ken earned a bachelor’s degree from Loyola University of Chicago. He moved to the Washington County area to serve as President of rose plastic USA, a world leader in the manufacture of plastic protective packaging, in California Technology Park. rose plastic has been committed to fostering a spirit of service among its employees and was recognized for its efforts in 2013 as the WCCF’s Charles C. Keller Excellence Award for Corporate Philanthropy recipient in the medium employer category.

Both on a personal level, as well as through rose plastic, Ken has been an enthusiastic supporter of the WCCF, sharing his time and talents in many ways, including serving on the Executive, Marketing, and Nominating (now Governance) Committees.

As Chair of the Marketing Committee, Ken was involved with the expansion of the Foundation’s award series in 2008, which included the inaugural presentations of three awards, the Louis E. Waller Humanitarian Award, Dr. Howard Jack Outstanding Public Educator Award, and Director’s Choice Award, as well as the creation of the James H. McCune Acorn Society for professional advisors. Under Ken’s leadership of the Nominating Committee, its responsibilities were expanded to include regularly assessing Board performance and reviewing the Board’s structure, composition, operations, and integrity to ensure the highest quality of governance. He stated, “The Trustees of the Board are all fantastic people, all giving of their time and what they can do.”

Perhaps one of the most noteworthy details about Ken’s dedication to the WCCF is that his hands-on role did not end with his term as a Trustee. In accordance with the bylaws, Ken rotated off the Board in 2014.  But, he has continued to be involved with laying the groundwork for the Foundation’s future as an advocate of its first strategic plan, even serving as a member of the Strategic Planning Committee and offering input to help guide the plan’s direction. “The Strategic Plan is a way for the Community Foundation to be more proactive . . . It’s very rewarding to see your ideas going forward,” he remarked.

Ken and his wife Sue have been very generous to the Foundation, participating in diverse initiatives and projects, such as WCCF Gives. They are also members of the Family of Founders, which helps to ensure that the WCCF has the operational support that is vital to continued growth.

In addition to all that he has done for the Foundation, Ken has been active with numerous other community groups. He has served on the Board of the Center in the Woods, Village of FPC, Middle Monongahela Industrial Development Association, Mon Valley Progress Council, and the California Chamber of Commerce. Additionally, he is a Past President of the California Rotary Club and served as a member of the California School District’s Strategic Planning Committee.