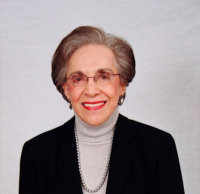 Although she was petite in stature, Martha Berman will always be remembered as a woman who had presence. She was insightful, savvy, and ahead of her time – all qualities that made her an unforgettable person and exceptional volunteer.

Martha was supportive of diverse local charitable causes; however, the single thread that seemed to weave all of her good work together was her passionate belief in the concept of community.

Her friend Ralph Andy remarked: “I remember when the Community Foundation was newly formed. Martha supported it, and she wanted others to support it . . . She believed that it should become the cornerstone of charitable giving in our community, and it has.”

Martha served as a member of the WCCF Board of Trustees from 2000 until 2009. Her affinity for supporting students in pursuit of higher education made her an apt choice for Chair of the Foundation’s Allocations Committee, which holds the responsibility of reviewing grant and scholarship applications. Additionally, some may recall that Martha worked as a counselor at Peters Township High School until her retirement in 1986.

Although she was known to joke about the process she used to make her selections (such as throwing scholarship applications down the stairs and assigning awards according to where they landed), those who knew her will attest that her role on the Allocations Committee was one that she took very seriously. Each application would be meticulously reviewed. And should there be two extremely well qualified applicants and not enough funds, Martha would discreetly slide a check to Foundation staff for the amount needed to award scholarships to both applicants.

Her generosity did not stop there. In addition to supporting the Foundation’s Family of Founders, Martha created the perpetual Berman Family Fund to support bereavement counseling for hospice families at Washington Health System.

Martha also may be credited with helping the WCCF to build relationships with key community members who ultimately became some of its most faithful donors. Her efforts in arranging those meetings led to transformational opportunities for the Foundation.

WCCF President & CEO Betsie Trew stated, “Our only regret is that we were not able to honor Martha with this award while she was still with us.”

Former Washington Hospital President Telford Thomas recalls that it was during Martha’s Chairmanship that the hospital was approached to join a larger regional health system. He attests, “She had a commitment to excellence in patient care . . . and very emphatically expressed that the hospital was part of the community and should be run locally.”

Her strong leadership helped to ensure that the hospital remained independent.

Additionally, Martha served as a founding member of the Washington County Mental Health Association, which was established in 1965. Former MHA Director Lynne Loresh reflects, “Knowing Martha is kind of like knowing an icon . . . she was one of the few women serving on boards at that time . . . and it was a joy to know her.”