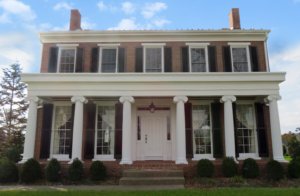 Much more than an attractive building, the historic Samuel Brownlee House has a fascinating story. The Brownlee family emigrated from Scotland to Washington County in the 1780s. Samuel T. Brownlee was born on the family farm in 1827. At only 21 years of age, he commissioned the
construction of the two-and one-half story, five-bay, brick house on the farm in 1848 as a wedding gift to his wife, Catherine H. Clark. It is believed that Mr. Brownlee utilized the plans for the Reed House (now called the Davis Memorial building on Washington & Jefferson's campus) which was built in the 1820s on East Maiden Street in Washington.

An addition to the Brownlee House was built in 1967, when it was owned by Charles M. Miller. It was Mr. Miller who took the necessary action in 1972 to have the original section of the House placed on the National Register of Historic Places.

Mr. Miller sold the house to William and Saundra Stout in 1986, and it served as the headquarters for the Atlas Railroad Construction Company owned by Mr. Stout, until he retired in 2010. The Stouts generously donated the property to the Washington County Community Foundation in December 2013.

Take a virtual tour of the Brownlee House.