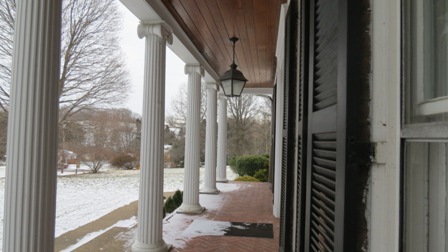 The following descriptions were taken from the Brownlee House's National Register of Historic Places Inventory application that was prepared in 1976. The lead preparer, James D. Van Trump, was one of the most influential and notable architectural historians in the Pittsburgh region and a co-founder of the Pittsburgh History & Landmarks Foundation.

"The Samuel T. Brownlee House is a two and one-half story, five bay, brick house done in a late Georgian house form. The brick walls are laid in common bond. Twin gable chimneys are located at each gable end. The gable ends contain two centrally located windows on each floor. These windows are six over six lights with post and lintel frames. The main facade features two full story windows on each side of the centrally located doorway. The central hall entranceway is beautifully articulated with thin sidelights, a transom, fluted pilaster jambs and a heavy architrave. 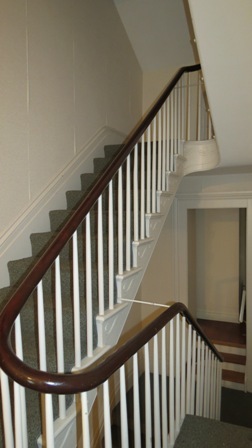 At the heart of the house is a beautiful staircase that connects the three floors.

The verandah is done in Greek Revival style. The intercolumniation of the six Ionic columns is perfectly aligned to the fenestration of the house. The delicately proportioned architrave, frieze and dentiled cornice articulate the full entablature. In this case, the carpenter revealed his mastery of scaling the verandah to the size of the house. The rear facade features a simple shed roof porch with Doric columns.

The interior contains a large central hall with two rooms on each side. A beautifully executed cherry staircase rises to the third floor from the central stairway. The house is in excellent condition and contains most of its original appointments."

"The house is an excellent example of the blending of two architectural styles. A dentiled cornice and Ionic verandah constitute the Greek Revival motifs on a formal Georgian house plan. The columns, entablature, and cornice are delicately articulated by the filets and dentils. The verandah is exceptionally well-proportioned and scaled to the size of the house. The Greek Revival and Georgian styles maintain their individuality. Their harmony gives the Brownlee House the stately, dignified qualities common to larger houses. The Brownlee House is one of the best preserved and well maintained formal Georgian-Greek Revival Houses in Washington County."