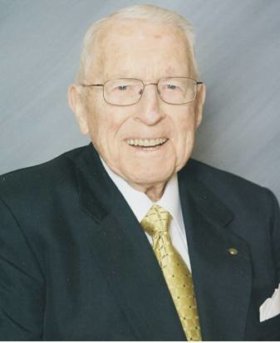 “Service Above Self” is Rotary’s motto, but Chuck Keller’s service to others began long before he became a Rotarian in the Rotary Club of California in 1950.

He was a life-long member of the California United Methodist Church, where he served in various roles, including choir director.  While attending college at what is now California University of Pennsylvania, Chuck served his fellow students by assuming leadership roles in a myriad of school clubs and activities.  Later in life he created a scholarship fund for students attending the University and helped to create the Student Alumni Association at the University.  An Eagle Scout, Chuck remained involved with the Boy Scouts of America throughout his life and welcomed opportunities to speak to young people about service.

But perhaps Chuck’s greatest service was his international service, through his leadership roles in Rotary.  Chuck served as Rotary International President in 1987-1988 and adopted a theme “Rotarians - United in Service, Dedicated to Peace.”

Under Chuck’s leadership, Rotarians united around the globe to raise an unprecedented $220 million for Polio Plus, to provide funding for polio vaccinations to the poorest countries and poorest people in the world.  Rotary’s (and Chuck’s) goal to eradicate polio from the earth is near to completion.  In 1988 there were more than 350,000 cases of polio around the world; in 2017 there were just 22 reported cases.  Hundreds of thousands of children have been spared the debilitating effects of polio because of the Polio Plus campaign.

"The challenge of world peace...is the most pressing imperative of our time…..In a world which possesses the means of self-destruction, if we do not find the path of peace, whatever else we do won't make much difference."- Charles C. Keller, Address to 1987 Rotary Convention, Munich, Germany

Chuck, your lifetime of service has made a significant difference to so many in this world.  Well done, Rotarian!