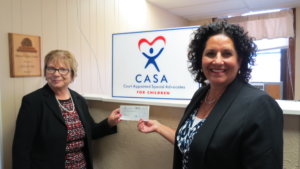 The Washington County Community Foundation (WCCF) is pleased to announce that it has awarded a $50,000 grant to the local CASA for Kids to assist the organization in its mission to advocate for the best interests of abused and neglected children in the courts of Washington County.  The grant was issued from the Foundation’s Salvitti Family Fund.

Childhood should be about making fond family memories and playing with friends on the playground.  It should be a happy, carefree time.  Unfortunately, for the over 400 children in Washington County who have been identified as abused or neglected, childhood is anything but happy and carefree.  These children worry about where they will live and who will take care of them.  They think that no one cares about them.

CASA volunteers are often the most consistent adult in the child’s life.  They listen to their children and let them know that someone does care about them.  CASA volunteers are vetted and must complete 30 hours of training and six hours of court observation, before they may be sworn in as a Friend of the Court and assigned to a child’s case.  In addition to spending time with their children, CASA volunteers review records, conduct research, and gather information from those who are involved in the child’s life.  The Court places such a high value on the work of the CASA, that the recommendation of the CASA is often included in the court order regarding the child. 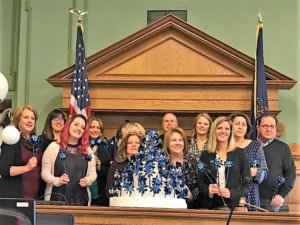 The goal of a CASA advocate is to have their child in a safe forever home. This could be a return home, if the situation that brought the child into care is corrected.  Or it could be to adoption, if that is in the best interests of the child. When a child has a CASA advocate, they receive more services and support, spend less time in the child welfare system and are less likely to enter the system again. Most importantly, a child is more likely to be in forever home and have a brighter future.  In April, 13 new advocates were sworn in as CASAs, increasing the advocate total to 53.  These advocates have been assigned to 109 children, approximately one fourth of the children in the Washington County child welfare system.

“It breaks my heart to learn the circumstances of children in Washington County who have been abused or neglected,” remarked Betsie Trew, WCCF President & CEO.  “With an underfunded child welfare system, we are very fortunate to have CASA for Kids in our community.  We thank the Salvitti Family for enabling us to award this grant to help CASA for Kids serve more children.”