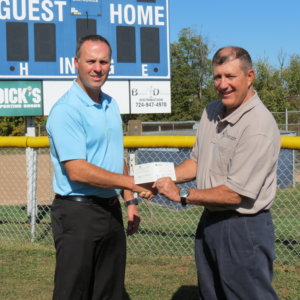 Joseph Frederick Perkins, a Burgettstown native, spent most of his career as a truck driver hauling the steel produced at Weirton Steel Corporation. He was also a relentless inventor and received a copyright for a few of his designs.  The Joseph F. Perkins Fund was created in 2002 by a bequest from Mr. Perkins to the Community Foundation. The direction from Mr. Perkins was that his gift be used to support youth programming in the Burgettstown area. Throughout the years, the fund has issued numerous small grants to organizations providing programs for Burgettstown youth.

As the final grant from the fund was considered, the WCCF sought a project that would have a significant and long-term impact.  The project selected was the Baseball & Softball Complex Upgrade of the Burgettstown Area Youth Baseball Association. The $6,000 grant will be used to add another batting cage and hitting area, bullpen areas at two of the fields, and replacement of the wooden spectator bleachers.

"This project was selected because of its significant impact over a sustained period of time," remarked Betsie Trew, WCCF President & CEO. "We are very grateful to Mr. Perkins for his generosity that will benefit thousands of Burgettstown youth over many years."

A 501(c)(3) charitable corporation, the Washington County Community Foundation manages both endowed and non-endowed charitable funds, with a total value of approximately $35 million.  Cumulatively, almost $10 million in charitable grants have been awarded in six broad categories of arts and humanities, education, environment and animal welfare, health and fitness, human needs, and religion and faith-based programs.  To learn more about the WCCF, please visit www.wccf.net or contact the Foundation at 724-222-6330 with any questions.