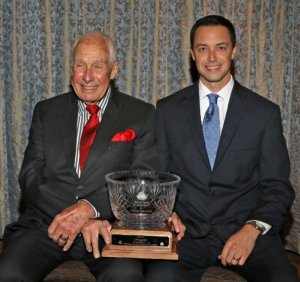 Arthur and Ryan Schwotzer of Crossgates

Arthur Schwotzer, founder and chairman of Crossgates, Inc., has a simple, yet effective philosophy for corporate and personal giving — “Give where the need is.” It’s a credo he has followed for many years.

Schwotzer graduated from the University of Pittsburgh as an engineer. He and a partner started a building company in 1952, and he initially specialized in constructing single-family homes. In 1959, he founded Crossgates, a full-service real estate and construction company. Over the years, the company has built apartments, nursing homes, offices, hotels, warehouses, and manufacturing plants. Schwotzer’s son, Gregg, joined the company in 1972. Grandson Ryan became president of Crossgates after his uncle Gregg’s death in 2014 and today runs the company, “. . . with a little bit of aid from me here and there,” says a smiling Schwotzer.

While Crossgates has made a significant mark on the community through its numerous real estate and construction activities, the company also encourages its employees to give generously to those in need. Every holiday season, says Schwotzer, the company and its employees donate to three or four charities, usually the Washington City Mission, the Salvation Army, one organization chosen by the company’s Harrisburg office, and one other organization. In 2016, for example, employees proudly participated in the Salvation Army Treasures for Children Christmas Gift Program, which supports local children and their families.

Crossgates has supported numerous other charities and organizations as well, including the Holiday Acres Summer Food Service Program in Latrobe, Big Brothers and Big Sisters, Catholic Charities, St. Clair Hospital, and HACC Central Pennsylvania Community College. Also, Schwotzer notes, “People here walk an awful lot” for charities such as muscular dystrophy. His employees often make him aware of instances where there is a specific or urgent need. “They like to see good things happen and are enthused by it.”

When a local car company needed a place to park its cars while building a new facility, it asked to rent one of Crossgates’ parking lots. Schwotzer agreed, with the proviso that the car company donate the money it would have paid in rent to either the Washington City Mission or the Salvation Army.

And Schwotzer’s profession has enabled him to personally make a difference in the lives of others in the community. Over the years, he has worked to build several churches at cost for congregations without the means. Several years ago, he combined resources with other builders, developers, and contributors to build a home for a disabled veteran and his family, making it possible for them to move in debt free. Schwotzer provided the stone and brick masonry for the home.

As for how much he’s given over the years, he says he doesn’t know. His focus is clearly on the need and not on the dollar amount. He traces his generous spirit back to his parents, who taught him through their own example in giving to others, and to his grandmothers. One of his grandmothers lived with his family when he was growing up; the other lived next door. “We lived way out in the country,” he says, “and there was always a pot of soup or something to feed those who needed it.” His grandmothers knew that down-and-out individuals or even their own relatives might be in need, and those people appreciated the “soup kitchen.” This made an impression on him. “It gets your heart beating in the right direction!”

“Overall,” he summarizes, “it’s been a good ride. People we have given to and donated to have been rewarded with those gifts. The buildings we’ve helped to create are still there and are important to the community. And if you can see something that benefits the community, it makes you feel it’s worth it, that you did a pretty good job.”

When asked what he would like to see as Crossgates, Inc.’s legacy in the community, he characteristically replies, “Staying successful and continuing to be involved in different realms of giving and social work that add value to [employees’] lives and the lives of those they help.”