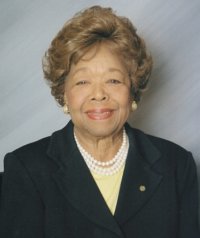 The Washington County Community Foundation (WCCF) is pleased to announce that Gwendolyn Simmons has been named the recipient of this year’s Richard L. White Excellence Award for Board Service. Created by the WCCF Board of Trustees in 2012, the award recognizes an individual who serves as an exemplary member of the Board, wholeheartedly sharing his or her time, talent, and treasures to support the Foundation and its mission. Both current and former Trustees are eligible to receive the award, which is named in honor of Founding Trustee and Past Chairman of the Board, Richard L. White. The inaugural award was presented to White in 2012.

A native of Hampton, Virginia, Simmons earned a Bachelors in Economics and Sociology from Virginia Union, and a Masters from Mount Holyoke.  She taught economics and sociology at Allen University and later at South Carolina State University.

Simmons served as a WCCF Trustee from 2006 to 2015, serving on many committees.  As a member of the Allocations & Programs committee and a former educator, she read, quite literally, thousands of scholarship essays.  Simmons frequently accompanied WCCF staff members on grant presentations in the Mon Valley, her home community that is near and dear to her heart, and her steadfast commitment to supporting the Mon Valley inspired a $25,000 EIO Fund grant to Ringgold School District, which launched its steel drum program.  Perhaps her greatest service to the Foundation has been as an active member of the Women of Philanthropy Giving Circle, where she has been particularly committed to recruiting new members.

In addition to all that she has done for the Community Foundation, Simmons has been active with many charitable groups in the Mon Valley over the years, including the Mon Valley United Way, where she served as President, the Mon Valley YMCA, the Monongahela Area Revitalization Initiative, Southwestern PA Human Services, and the Board of Trustees of California University of PA.  She was also the President of the Washington County Historical Society and is a member of the NAACP.

When asked which of her many activities has had the greatest significance to her, she remarked, “The things I received the greatest benefit from personally were anything involving working with young people and their development.  The thing about volunteer work is that you are the recipient of so much from other people. They inspire you, you listen and learn from others, you learn to work with other people, and you learn to see that people working together can make a difference.”

The Richard L. White Excellence Award for Board Service will be presented to Simmons at the WCCF’s annual Legacy Luncheon on Friday, May 19.