John and Sophie Choratch to be Recognized Posthumously for Philanthropy

The Washington County Community Foundation (WCCF) is pleased to announce the 2017 Philanthropists of the Year are John and Sophie Choratch, who are being recognized posthumously at the Foundation’s Philanthropy Banquet on Thursday, November 2, 2017, at the Hilton Garden Inn at Southpointe. Proceeds from the event will support the charitable activities of the WCCF, including the John and Sophie Choratch Scholarship Fund.

The Foundation created the Philanthropist of the Year award in 1999 to recognize local philanthropists for exceptional generosity to the Washington County community.  Criteria for the award are as follows: Demonstrated exceptional generosity, relative to one’s ability to give, through personal financial gifts to local charitable causes; Demonstrated encouragement and motivation of others to financially support local charitable causes; Documented efforts to improve the quality of life in Washington County through volunteer leadership of local charitable and other community activities; and Documented efforts to advance philanthropy in general.

When the mill closed, John and Sophie purchased John’s Flower Shop in Donora as a means to provide for themselves.  The flower shop was one of three flower shops in Donora at that time.  Shortly after making that purchase, John suffered a heart attack and died, leaving Sophie to manage the store on her own.

“Sophie knew nothing about the flower business,” remarked Richard Harrison, a floral designer and native of Donora.  “She attended the Hixson School of Floral Design to learn how to do arrangements, but she didn’t care much for the creative side of the business.  So she hired me and I worked for her for 29 years.”

“What Sophie knew was money, how to make it and how to save it,” he laughed.  “She could rub two nickels together and get a dime.”

Sophie became an astute and successful business woman by working hard and putting in long hours.  After working a full day in the store, she would retire to her apartment above the store to do the bookkeeping.

“She was great with people and handled all the sales, both in person and over the phone,” said Richard.  “Sophie knew everyone in Donora and everyone knew her.  She opened accounts at the three local banks so that when they needed flowers, they would call her.  No one was surprised when her flower shop outlasted the other two flower shops in town.”

Later in life Sophie went on trips with the senior citizens and other groups.

“She went to Spain, Hawaii and Italy, but always on a shoe string and she never flew first class,” Richard said.  “She didn’t believe in spending money if she didn’t have to and didn’t even want to take her Social Security benefits because she said she didn’t need the money.”

Sophie sold the store and retired at age 86; six months later she died.

“When she gave up the store, she gave up living,” said Richard.  “The flower shop was her life.”

As Sophie was preparing her will, she instructed her attorney, the former Paul Barna, to include some financial gifts to family members, as well as $25,000 to the local Meals on Wheels program and $25,000 to the Donora Public Library.

“Sophie knew many of the people in Donora who relied on those meals and she wanted to help them.  She was frugal but she had a good heart,” said Richard.  “She also believed in education and viewed the library as a form of education.”

Sophie clearly believed in education as she instructed that the residue of her estate be used to create a perpetual fund to provide scholarships to local high school students.  Sophie wanted students to be able to attend any post-secondary school in the country to pursue any vocation.  Above all, she wanted a fair selection process.  The Washington County Community Foundation was selected to administer the scholarship fund.

When the tragic events of September 11, 2001 occurred, Sophie wanted to help the victims in New York. In a codicil to her will, she instructed that the scholarships be given to students whose parents were victims of the September 11, 2001 Twin Towers Tragedy.

In response to the 9/11 tragedy, many Americans like Sophie were moved to contribute to charities to help the victims. In fact, contributions were so great that charities stopped accepting gifts and urged those wishing to help to contribute in their local communities. Because the original intent of Sophie’s fund was no longer practical, Washington County Orphans Court permitted the Community Foundation to redirect the scholarships to the children of first responders in Washington County.

A total of $720,000 was received from Sophie’s estate, making this fund one of the largest scholarship funds of the Community Foundation.  Today the John and Sophie Choratch Scholarship Fund is valued at more than $900,000 and has provided a total of $175,000 in scholarships to 70 Washington County students whose parents are first responders.

“That is fantastic!” exclaimed Richard.  “Sophie would be very pleased to learn that so many children are being helped." 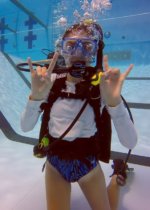 One of the students who has been helped is Alana Luppino, a graduate of Washington High School who is attending the University of Miami.  “Last semester I was able to receive my open water diver certification through my school's SCUBA club, which will be beneficial for my prospective career as a marine scientist,” she said. 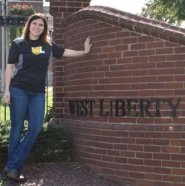 Brooke Dorsey, a graduate of McGuffey High School and current business major at West Liberty University, said having the scholarship cover a portion of her tuition enabled her to purchase a camera to pursue her love of photography.  She recently joined the West Alexander Volunteer Fire Department as a social member.  Brooke said, “My mother and grandfather are both first responders.  I look up to them in everything that they do and wish I could be as great as they are.”

“This scholarship has helped me in choosing my major to become a nurse,” remarked Mikala Maltony, a graduate of Washington High School who is attending the University of Akron. “If it wasn’t for this scholarship and for both my parents, my father a firefighter and my mother a nurse, I wouldn’t have found my passion for helping others and wanting to make a difference in other people’s lives.”

Boomer Kemp, a graduate of Peters Township High School and current public health major at Slippery Rock University, said the scholarship support enables him to volunteer more at college.  “Volunteering is my way of earning this scholarship,” he said. 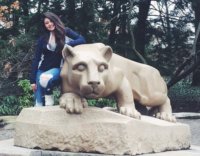 Chartiers-Houston High School graduate Hunter Saieva wants to help police officers who have been wounded in the line of duty.  She said, “My father was injured by a bullet and God gave him a second chance at life. Since then, I knew that I couldn't follow in his footsteps and worry my family. I am continuing my education here at Penn State as a Psychology major in hopes that I will get to help police officers talk and cope with situations they've been through.”

Alex Adams, a graduate of California Area High School and current finance major, hopes to one day provide help to students like he has been helped.  He said, ‘The Choratch scholarship has enabled me to attend California University of PA and focus on my studies.  I realized very quickly the value of a dollar when the acceptance letters and financial obligations from colleges began coming in the mail. I then knew I needed to maximize my available funds to get the best education I could afford.  I want to be able to be in a position one day to give back to the community, help others maximize their educational potential and possibly have a scholarship of my own to award.”

“There surely is a star shining over her grave at the cemetery,” said Richard.

Anyone with additional information regarding John or Sophie Choratch, or anyone wishing to make a reservation to the banquet, is encouraged to contact the Community Foundation at 724-222-6330 or info@wccf.net.