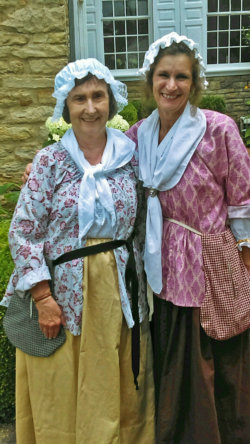 The Washington County Community Foundation is pleased to announce that through a $2,000 grant from the McBride-McMaster Fund, the Bradford House Historical Association was able to supplement its existing wardrobe with new eighteenth century reproduction clothing and accessories. One of the purposes of the fund, created by Dr. Gilbert McMaster and Margaret McBride-McMaster, is to preserve and promote the history of Washington County.

Period dress greatly contributes to the overall experience a visitor can have at a historical site; therefore, eighteenth century clothing is the cornerstone to many events and activities surrounding the Bradford House Museum.

During the annual Whiskey Rebellion Festival, which boasts attendance in the thousands, the Bradford House will loan its wardrobe to actors portraying historical figures such as David Bradford and Alexander Hamilton. The garments are also used by other local historical sites such as Woodville Plantation, the LeMoyne House, and the Mingo Creek Distillery for their events.

Since these items cannot be bought “off the rack,” Debbi Lambert of Globe Thistle Clothier (Chillicothe, Ohio) and Jan Marietta and Lorry McMahon at Opening Night Costumes in Washington skillfully helped to create the custom garments.

Some items were made with specific individuals in mind, like the Town Crier and David Bradford, while other pieces (shirts, chemises and stockings, petticoats, frock coats, and caps) were needed to help complete outfits. The design, including the choice of fabric fiber, weave, color, and pattern, was dictated by what is historically accurate.

“Washington at that time was the frontier, and people wore a variety of clothing types. So, we have attire for gentlemen and ladies, farmers, hunters, housewives, and servants. Now that the Bradford House has expanded its hours and the Whiskey Rebellion Festival is getting bigger every year, we needed clothing that will fit a variety of volunteers and reenactors who dress in period attire,” stated Paula Anderson, Bradford House Historical Association Board Member and Museum Docent.

Most of the garments will debut at reenactments and tours happening at the Whiskey Rebellion Festival, which will run Thursday, July 5 through Sunday, July 8.

“Although he spent his career in medicine, Dr. McMaster was a great history enthusiast who would surely take pride in knowing his fund is helping so many people to experience our community’s past,” remarked Betsie Trew, WCCF President & CEO. “During each grant cycle, the WCCF must carefully consider how each fund’s distribution, no matter the dollar amount, can make the greatest impact on a charity and those it serves. This grant from the McBride-McMaster Fund provides a wonderful example of how even a modest grant can have significance.”

For more information about the Community Foundation, please visit www.wccf.net.