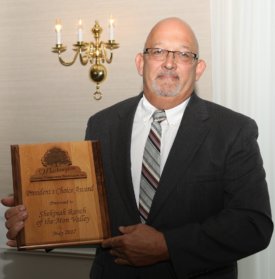 The Washington County Community Foundation (WCCF) is pleased to announce that its annual President’s Choice Award was recently presented to Shekinah Ranch of the Mon Valley.  The award included a $10,000 unrestricted grant from the Foundation’s Acorn Fund.

The Christian based, non-profit camp utilizes horses, recreational, physical and spiritual activities to draw out the creativity, diverse interests, and adventurous spirit of every camper.  Over the past 15 years, the organization has served over 2,500 boys and girls from 5-18 years of age, with most youth residing in Washington County.  Shekinah Ranch regularly adjusts its program offerings and has designed programs specifically for the Girl Scouts and members of the Mon Valley YMCA.  In recent years, it has added a zip line, rock wall, gokarts, paintball, hiking, swimming and fishing.  But the equestrian component of the camp has been the primary program component since the camp was initiated by Pastor Tom Ravasio, who continues to serve as the organization’s director.

The President’s Choice Award, previously the Director’s Choice Award, has been given annually for ten years.  The goal of the award is to assist a small but improving charity the way the Foundation was helped by its earliest supporters. To be eligible for the award, charities are required to have an operating budget of less than $250,000, have been in existence for at least three years, and provide a program in one of the six areas supported by the Acorn Fund – arts and humanities, education, environment and animal welfare, health and fitness, human needs, or religion and faith-based. Applicants are judged on quality of programming, community impact as gauged by the number of people served, programs offered, or other measurable component, and improvement in the organization’s finances over a period of years.

“Because of our own very humble beginnings, there is a special place in the heart of the Community Foundation for small but improving charities, such as the Shekinah Ranch,” stated Betsie Trew, WCCF President & CEO.  “We have been pleased to see the organization increase its programming while also improving its financial health.  Shekinah Ranch is a great example of a small charity doing very good work.  On a relatively small operating budget, it is providing a meaningful service to the youth of Washington County.”