The Washington County Community Foundation (WCCF) is pleased to announce that the work of two nonprofits this year will benefit from President’s Choice Awards. The Highland Ridge Community Development Corporation and Independence Conservancy each recently received $10,000 unrestricted grants from the Foundation’s Acorn Fund.

The President’s Choice Award, previously the Director’s Choice Award, has been given annually for eight years. The awards assist small but developing charities in the manner that the Foundation’s earliest donors helped it. This year marks the first time the Foundation has been able to issue two of these top awards.

Awardees must have operating budgets of less than $250,000, have been in existence for at least three years, and provide programming in areas supported by the Acorn Fund: arts and humanities, education, environment and animal welfare, health and fitness, human needs, religion or faith-based.

Besides program quality, applicants are judged on community impact and improvement in the organization’s finances over a period of years. 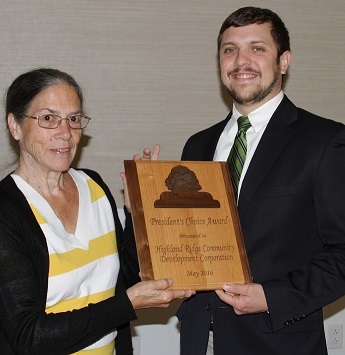 Highland Ridge Community Development Corporation’s initiatives were lauded for returning a sense of community to the City of Washington’s Highland Ridge neighborhood, which has suffered from blight and crime. HRCDC’s work assists low-income senior citizens, families, veterans and others.

Its standout Mending Fences program taps volunteers to make repairs and renovations for homeowners in need. It also operates a Staying Green gardening and clean-up program in its endeavors to improve the educational, academic, social and economic climate of its community.

Besides praising its philanthropic works, WCCF President & CEO Betsie Trew said the Highland Ridge Community Development Corporation drew high marks for its forward thinking in agreeing to undergo an annual audit. “Such an audit is a valuable management tool for its leadership and is a first step in approaching institutional funding sources and securing larger gifts from individuals,” she said. 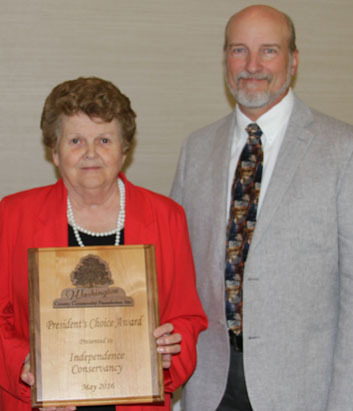 Using land trust Standards and Practices, the Independence Conservancy preserves land in Southwestern Pa. to protect open space, wildlife habitat, natural and cultural resources, scenic views and quality of life. Endeavoring to improve water quality, it owns and manages the Abandoned Mine Discharge (AMD) treatment systems in the Raccoon Creek Watershed, which has its origins in Washington County.

It is establishing the Langeloth Valley Conservation Area, near Burgettstown, which will permanently preserve 73 acres of woodlands, wetlands and streams south of the former American Zinc & Chemical Co. smelter site.

The Conservancy has achieved over $1.5 million of environmental reclamation and land preservation since its founding in 1999. With the help of community partners, land owners, volunteers and others, the Conservancy’s vision is to protect and conserve land in the Raccoon Creek Region in perpetuity.

Noting her strong support for conservation and environmental preservation, Betsie noted that Independence Conservancy has stepped up to fill a void in land stewardship in Washington County and its work to mitigate mine and industrial threats to water supplies “impacts every living creature within the (Raccoon Creek) Watershed.”