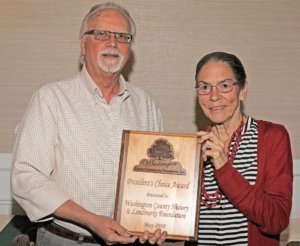 The Washington County History & Landmarks Foundation is a private, non-profit educational organization which encourages the preservation of buildings, structures and sites that are deemed representative of the culture, architecture, and history of Washington County, Pennsylvania.  It was created by a $25,000 bequest nearly five decades ago.

The President’s Choice Award, previously the Director’s Choice Award, has been given annually since 2008.  The goal of the award is to assist a small but improving charity the way the Foundation was helped by its earliest supporters.  To be eligible for the award, charities are required to have an operating budget of less than $250,000, have been in existence for at least three years, and provide a program in one of the six areas supported by the Acorn Fund – arts and humanities, education, environment and animal welfare, health and fitness, human needs, or religion and faith-based.  Applicants are judged on quality of programming, community impact as gauged by the number of people served, programs offered, or other measurable component, and improvement in the organization’s finances over a period of years.

“Although the focus of its quality programming is in the past, the Washington County History & Landmarks Foundation realizes that it must embrace modern technology to ensure that it will be a community asset in the future.  Therefore, part of the $10,000 grant the organization will receive as part of this award will be used to computerize much of its historic collection and purchase accounting software,” stated Betsie Trew, WCCF President & CEO.  “The President’s Choice Award was designed to foster growth within a worthy local charity, and we look forward to seeing how the Landmarks Foundation will evolve as a result of this support.”

For more information about the Community Foundation, please visit www.wccf.net.