For Love of Community 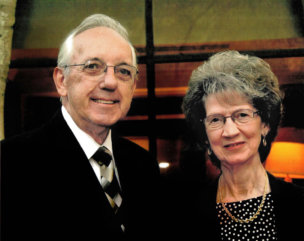 Donors are unique. They come to the Washington County Community Foundation (WCCF) with a broad spectrum of giving abilities and diverse areas of interest; however, there is one word that can connect them all: local.

Lifelong residents of McDonald, PA, Alvin and Carol cared deeply about our community. It was a 2005 story in the Observer-Reporter about a special $100,000 Decade of Service grant cycle celebrating the Foundation’s 10th year of operations that first piqued their interest. Then, a telephone conversation with the Bertholds’ attorney regarding the ten local charities selected in that special cycle, as well as the fact that the WCCF was governed by local community leaders, set in motion the couple’s plans to utilize the WCCF to achieve their charitable goals.

During their lifetimes, most of their gifts were anonymous, including a $50,000 gift to the Arts Fund, which helped to secure a $125,000 one-to-one challenge grant from a private foundation. The purpose of this fund appealed to Carol, who loved to dance. “I’m not a very good dancer,” she often said, “but I love the movement of dance, especially ballet, which always gives me great joy.” Carol danced as a young girl into her senior years, until balance issues became a part of her everyday life. To enable others to experience the joy of dance through post-secondary study, she created the perpetual Carol Berthold Scholarship Fund for Dance with a $360,000 testamentary gift. Last year, Tomás Balk, an accomplished dancer from Trinity High School who studied at Moshetta’s Performing Arts Center in Washington, received the fund’s first $18,000 scholarship.

History and heritage were also important to the Bertholds, and in 2013, they led to Carol anonymously contributing the first monetary gift ($50,000) to the Brownlee House Building Fund. She later provided an anonymous $200,000 challenge gift for the Brownlee House Preservation Fund and then another $50,000 by bequest. Carol said that she and Alvin had considered purchasing the Samuel T. Brownlee House some years ago, but that she couldn't bring herself to leave her hometown of McDonald. Carol visited the Brownlee House several times during its rehabilitation and expressed her delight that this grand structure would become the home of the WCCF and would be open to the community.

The most significant gift from the Bertholds supports the Alvin and Carol Berthold Fund, a hybrid designated/discretionary fund of about $6,500,000. Twenty percent of the annual grant-making amount will be issued as grants to designated charities whose missions resonated with Alvin and Carol, including the Greater Washington County Food Bank, Heritage Public Library, LeMoyne Community Center, McDonald Volunteer Fire Department, Old Schoolhouse Players, and Primrose School & Museum.

The remaining eighty percent of the annual grant-making amount will be awarded to charities at the Foundation’s discretion. In honor of the Bertholds and in celebration of the Foundation’s 25th year of operations in 2020, the Alvin and Carol Berthold Fund issued grants to 25 local charities through a special $150,000 Charity of Excellence grant cycle. Blueprints, a multi-faceted human services charity that annually serves more than 20,000 people locally, received the cycle’s top award of $25,000.

But this is just the beginning of the impact of the Bertholds’ generosity, as their giving has transformed the Foundation’s discretionary grants program. Beginning in 2021, the Foundation will combine the annual distribution from the Alvin and Carol Berthold Fund with the distributions from other perpetual funds to conduct two annual capacity-building grant cycles. Grant amounts will range from $5,000 to $50,000 and will total $250,000 this year.

As the Alvin and Carol Berthold Fund and the other funds grow, so too will the total grant amount. Yet, what will remain unchanged, is that the grants in these two grant cycles will be issued exclusively to local charities performing outstanding work here in Washington County – the community that was so close to the Bertholds’ hearts, and the community that is at the very center of the Foundation’s charitable mission.